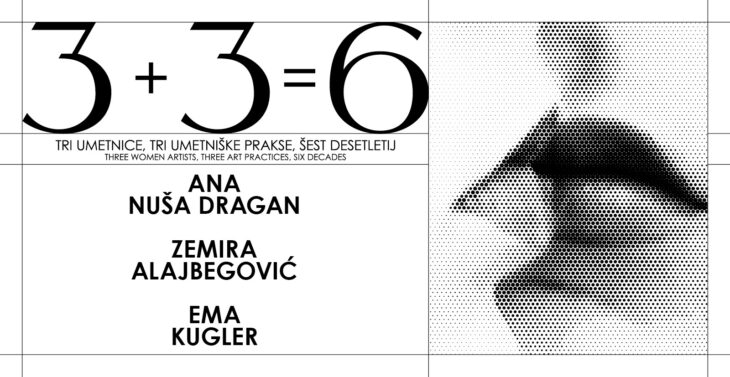 The exhibition in the City Hall Glass Atrium has already been installed and is on view during lock down daily from 8am to 8pm. After the re-opening of galleries, it will be prolonged for another few weeks.

The exhibition presents video works, films, documents and objects by three women artists: Ana Nuša Dragan, Zemira Alajbegović and Ema Kugler who were/are active in the field of action/performance, film and video art in Slovenia. The beginnings of their activities date back to different periods of the 20th century: the 1960s (Dragan), the 1980s (Alajbegović) and the 1990s (Kugler). They have always worked in collaboration with numerous artists and in tune with the challenges of time, either in frame of socialist system or the one of liberal capitalism. The specific conditions of production have thus largely defined their artistic practices, ranging from Conceptual and Alternative to Post-Modern Art. Film / video was the central means of expression for them, and the basis for it was often live action, either happening and event or performance. Their characteristic narration oscillates from documentary to performative and poetics.

The most important activities of the project will be related to the field research of audio-visual material, documents and works of art as well as workshops, interviews, talks, presentations, and exhibition. We will try to demarcate the specifics of works of art and stories of the artists, and to compile and connect specific (interrupted / suppressed / disregarded) histories in collaboration with various key experts (writers, artists, archivists, critics, curators). The result of the research will be organised documentation, international conference, publication and archive in the common repository.

SCCA-Ljubljana, Center for Contemporary Arts is a non-profit production, research and educational organization that establishes an interdisciplinary support system for contemporary artistic practices. The main programs are the archive of video and new media art DIVA Station and the School of Curatorial Practice and Critical Writing World of Art.
Researching artistic oeuvres, their presentation and archiving is one of SCCA key program directions, and 3 + 3 = 6 exhibition matches well with its exhibition program of video and multimedia art made since 2005: