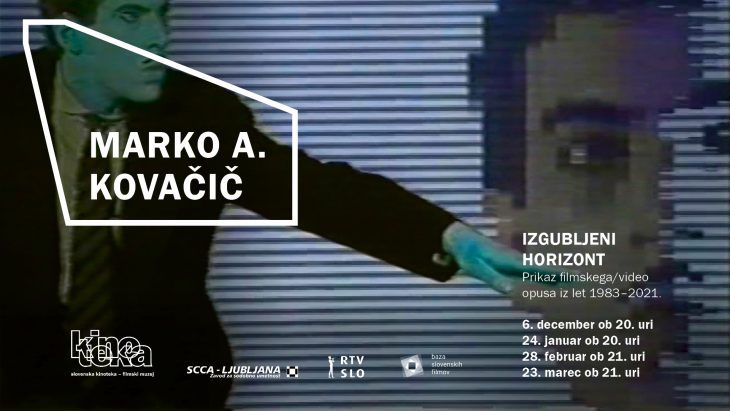 The programme of Marko A. Kovačič‘s artistic opus with screenings, an exhibition and accompanying programme is being prepared in cooperation with the Slovenian Cinematheque. We keep his works in the archive of DIVA Station and have been systematically researching them recently, as the artist is one of the important representatives of film and video creativity in Slovenia. From now on, Kovačič’s film and video opus will also be stored in the archives of the Slovenian Cinematheque.

For the first time, Marko A. Kovačič’s works will be comprehensively put on display and for consideration by experts and the general public, as well as the younger generation, who may not yet be familiar with them. Short films and video works are rarely shown here in cinemas or on television, more or less they can only be seen at festivals (e.g. FeKK short film festival and V-F-X Ljubljana festival of experimental audiovisual practices). The program, which will also be partially accessible on the Slovenian Film Database (BSF) online, will take us through Kovačić’s forty-year opus with screenings once a month from December 2022 to March 2023, which includes narrative, performative, experimental and documentary works, from the early analog on magnetic tape (VHS, U-matic, Beta) to later digital formats. In addition to the author, experts of film, video, new media and the author’s works will participate in the programme: Barbara Borčić, Peter Cerovšek and Igor Prassel.

The poster exhibition and the video installation The Surviving City in the Cinematheque Cafe (6–31 December 2022) will at least somewhat demonstrate the multimedia dimension of Kovačič’s artistic practice.

All this is a good reason for happy celebration, because after the three joint projects so far (Miha Vipotnik, Ema Kugler, Marko A. Kovačič) there is promise of a continuation of this kind of cooperation in the fields of screening, critical reflection and preservation of audiovisual cultural heritage.

The first programme of Marko A. Kovačič’s opus focuses on the subject of the Plastos Civilization, which employs the author in a series of installations, performances and video works, while using narrative, experimental and performative approaches. The central place belongs to the author’s video Forth Into the Past – a comprehensive presentation of the constructed world of Plastos, creatures from organic and mechanical parts that will mutate, survive and found the city of Katastropolis after wars, ecological and other disasters.

The screening will be followed by the opening of the video installation The Surviving City and the poster exhibition, which will be on display in the cinema cafe between 6 and 31 December 2022. 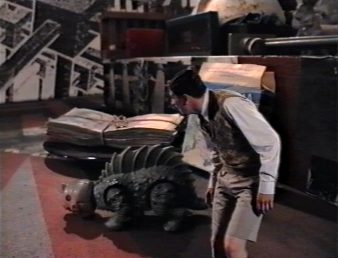 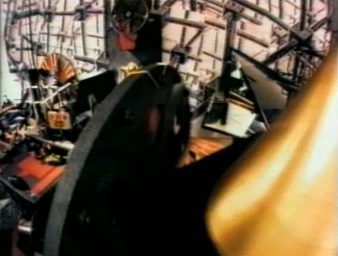 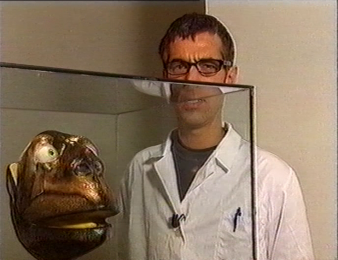 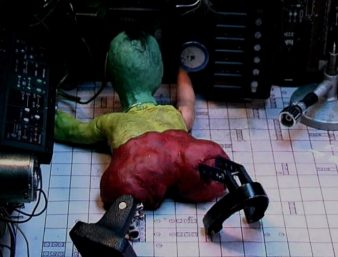 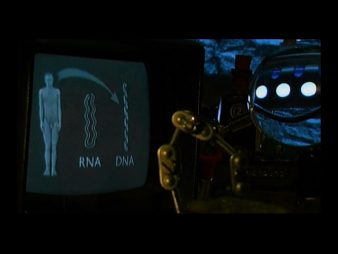 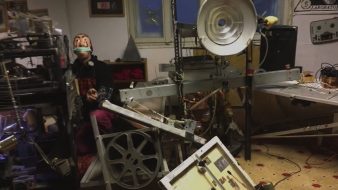 An overview of the author’s video works, from the legendary multimedia project Casus Belli to the first births of performative detective characters immersed in models, installations and images of the Disney-noir macro video world. In this world, the author also places the politically engaged grotesque No More Heroes Any More, and in the end he allows us to return to the everyday social realism of workers’ utopias and dystopias.

After the screening, Peter Cerovšek and Igor Prassel will talk to the artist. 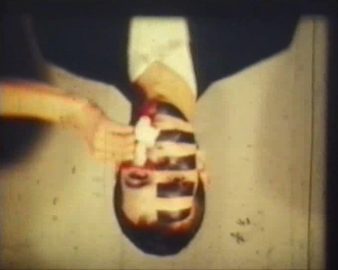 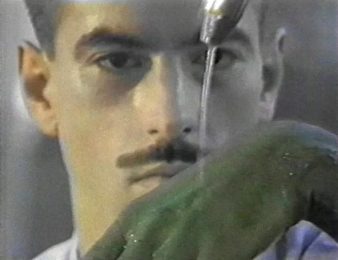 Song of Flesh and Image Was Made Body
Marko A. Kovačič, Slovenia (Yugoslavia), 1985, digital format (shot on VHS and U-matic), colour, 16′ 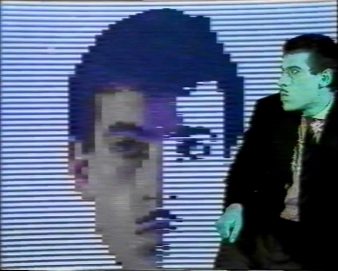 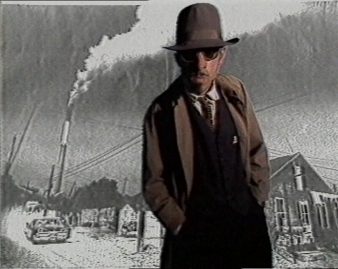 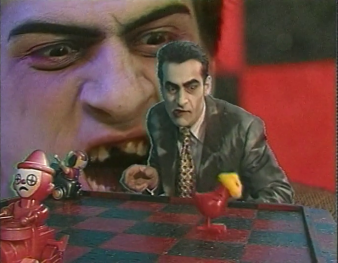 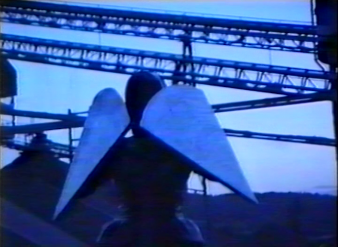 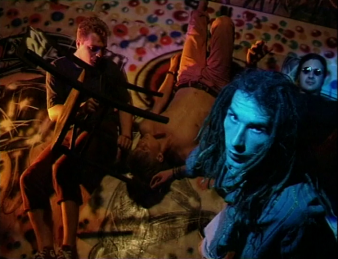 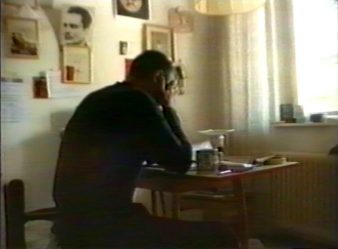 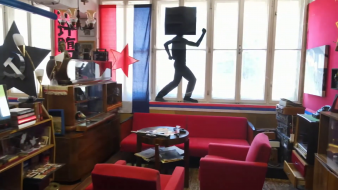 A program of film works by Marko A. Kovačič, which derive from the author’s new-wave and expressive performances, the dramaturgical performative dynamics of the Ana Monro Theatre or the humorous epic of the music-visual group Zlati Kastrioti. Thematically, they encompass the author’s recognizable motifs and visual image, everything from shifting identities, erotica, politics and psychoanalysis to the satirical genre exploration of the detective story with an intertwining of the personal and the artistic.

The screening will be introduced by media theorist dr. Melita Zajc.

The programme presents a 3-channel video installation on the stage of the Slovenian Cinematheque, based on Kovačič’s retrospective work Dossier 83:03. In it, the author presents to the viewer a voluminous artistic file of his twenty-year creation. The events-images line up in front of the viewer as sequences and are assembled through time and space into a narrative based on personal and collective history. Documentary, media and work recordings are interwoven with personal memories, contextual comments and the author’s reflections. Twenty years later, reflection in the video space is also offered to visitors of the Slovenian Cinematheque.

Marko A. Kovačič brought the multimedia dimension of his artistic practice into the posters he designed for his videos, performances, exhibitions and group projects. He started working with spatial and graphic design in 1981, when he and Andrej Rozman – Roza founded the Ana Monro Theatre, for which he spent years developing an integrated visual, graphic and scenic image with props, photo montages and film material. He built posters similarly to his spatial installations and also established a space-figure relationship on a two-dimensional support. They were based on constructivist principles and processes of collage and photomontage, often in a black and red color scale. Photography — its appropriation and inclusion in the form of a screen (scenes from films or photos of actors) — together with well-thought-out typography, became a distinguishing sign of his graphic structure in various techniques (xerox, black-and-white or color printing, unique street posters).

THE AUDIOVISUAL PRACTICE OF MARKO A. KOVAČIČ

Although a sculptor by training, Marko A. Kovačič focused on moving images and performative practices early on. Already his first work, Casus Belli, consisted of an art film, a performance and an art video. The creative procedures, complex instrumentation, use of media and thematic framework present there become recognizable building blocks of his practice and form a recognizable author’s style. It is characterized by the principles of constructivism and popart, the author’s performativity and close involvement in all creative phases of the creation of an AV work, as well as processuality in the construction of narratives that have social and political dimensions. He doesn’t teach, rather he gives us funny hints, which are no less serious because of that.

As a member of the Ana Monro Theatre, he transferred the choreography of street theater movements to his AV works, in which the body and ritual play an important role. He created characteristic characters, which he mostly played himself and inserted into a pre-made scenography – often in the macro world of assemblages, collages and bricolage. He enlarged this world into video environments using the inlay technique – inserting one image into another using the chroma key process and creating specific effects. He enforced the play of perspective and the position of the gaze both with video and film effects as well as with spatial installations and created a layered view that reached beyond the typical horizon and which is associated with performative magic tricks.

All this led him to discover a new system, a different reality and a special equation of evolution, which he calls The Plastos Civilization. He introduced time as a dynamic process in an endless cycle and a constructed space/world that is a game of changing images and ideas. Even if his works seem fictitious, scientific discoveries and social changes are the subjects of Kovačić’s artistic reflection and criticism. This branches through his works with the breath of a humorous undertone or as grotesque and indirectly conveys that retreating into the fictional realm is the only way to face reality, political, existential or personal.

*Unless stated otherwise, the city is Ljubljana

Marko A. Kovačič (1956) is a multi-media and interdisciplinary artist who has made an important mark on the Slovenian cultural space with his works. His forty-year opus includes art films and video works, performances, installations and environments. The specifics of his practice are the integration of media, imaginary narration, changing roles and personal identities. In the 1980s, as a protagonist of the Ljubljana alternative scene, he staged the anthology new wave performance Casus Belli. With characteristic irony, he tackled political themes and social changes, injecting a great deal of humor and absurdity into his works. His video No More Heroes Any More, a parable about politics and war, staged as a game of chess, was included in its collection by media archive Transitland (Berlin). Parallel to his experimentation, ever since his fascination with “montage ecstasy”, he developed a personally engaged reflection of contemporary social phenomena and, in the spirit of historical avant-gardes, also thematized the concepts of museum institutions and collections, television, political ideologies and social utopias. When he staged his own television in empty TV boxes, which he filled with his mise-en-scènes, he was declared “our richest television company”. With Subauction (lowering the price by destroying the artwork), he thematized the position of the independent artist. All the time he pondered the relationship between art and science, past and future, personal and collective memory. In the 1990s, he designed the sci-fi Civilization of Plastos, beings from the future, and created fantastic futuristic environments and videos dominated by the character of props and scenes (mechanical figures, peepholes, TV objects, a model of the city of Katastropolis, a hrupofon (bruitphone). With the full measure of collecting passion, he first set up his museum collection in the Škuc Gallery in 1994 and, during the pandemic in 2020, developed it into a “museum of our and your half-past history” in The Post at the Red Star in Trbovlje.

Coproduction:  SCCA-Ljubljana/DIVA Station and Slovenian Cinematheque
Partners: RTV Slovenija, Baza slovenskih filmov (BSF)
Supported by: Ministry of Culture of the Republic of Slovenia and City of Ljubljana – Department for Culture