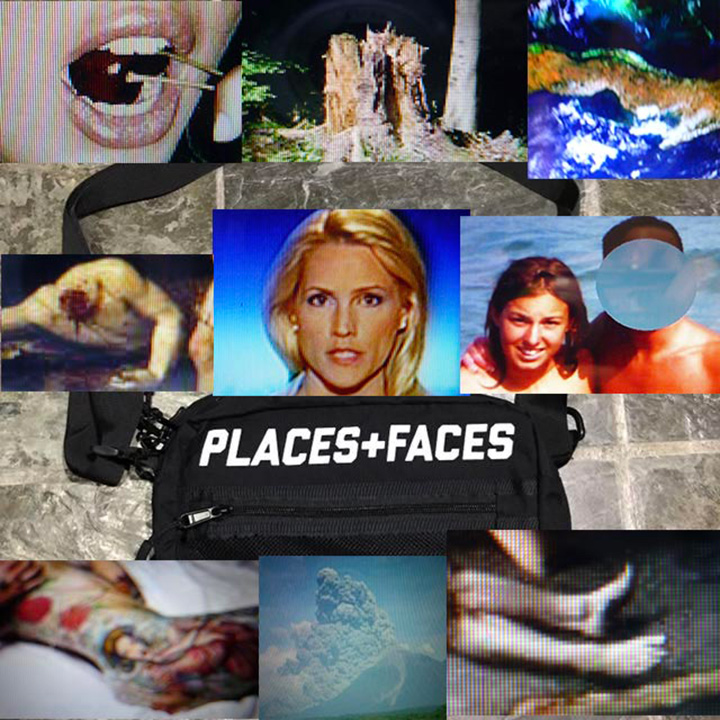 I could hear, I could smell, I could feel the floor with my hands but I could not see at all. Later they blindfolded me… The only time we were without our blindfold in the presence of our captors was when they videotaped and photographed us. But it is not as if we could see… We thought we were outsmarting them and we discovered that we could see through the slits at the bottom of our blindfolds. We were not. It turns out that they knew very well that we could cheat in fact they expected and wanted us to cheat, they wanted us to focus on this opening, this slit.
(Hostage: The Bachar Tapes’ (2001) by Walid Raad)

In his novel „Abfall für Alle“ [Trash to everybody] the German author Rainald Goetz once noticed, a little bit annoyed, that on TV there are two kinds of images: Faces and Other.

Why is media always presenting faces to us, that in serious cases, mean either nothing or everything? Either one watches the one who sees, or one watches what he sees. Either the images watch and it stays hidden what they see, or they are watched and the images just mask the faces of those who see and speak about them. Either they are innocent, – just a messenger, – or they are engaged as a witness for that, what comes out of their mouth. Either they are an image or just a medium. Either a face or just landscape and structure. In any case they are the place of a fundamental division.

Other than TV, art, and especially video art, seems not so much the place of talking. Talking is delegated to the institutions of curation and critique. Works of art claim to be entitled as special amongst other objects. Talking about them is what shall happen afterwards, when the work is done, in the name of an artist, or a kind of historical knowledge about this and that period of artistic production.

But nevertheless, the artwork speaks. And there are many different kinds of video art that speak exactly about this division of the image and those who bear witness to it. Whether they are abstract, fictional, serious, funny or just videos with good music. Many kinds of videos deal with the split of the gaze in somebody that watches: the spectator/artist; and something that is watched: the artwork. They may use language, or don’t use it, but they all talk about this split in the gaze that opens these dead recorded images to the desire of extracting a living being out of it. While doing that, the tables are turned: The image speaks in the name of the artist about itself, to those who watch it. In this case faces become similar to letters and the video becomes an interface between the mode of ‘immediate’ apprehension of an image and that of interpreting it; which means: defining the meaning of the image through that, which it does not show. The meaning of the face can be read because it is embedded in a landscape of other images, to which it’s supposed to react (that what it sees), so it can represent all the horrors, joys, worries,… the fate of a certain something. And at the same time the face is also again apprehensible as a kind of landscape, topologically charged with symbolic energy, while landscapes can, from above, vice versa, also appear as faces. The video image becomes an interface between face and landscape, between what sees and what is seen, what is treated as an object and what is treated as a letter, what speaks and what is spoken about; and nonetheless, between the affective life and the affectuated, dead, substance – or is it the other way around? What speaks and what is spoken about in the programmed image?

The eye itself, our most sensitive organ, is like a wound, an almost defenceless opening of the body. The closure of the lids guarantees protection of infection, the tears provide cleaning. The cut produces a second wound, that is, from a medical point of view, irreparably destroyed. But metaphoricly spoken, it is also a cut, that, in film, opens the eyes towards a new seeing. A slit cutted into the eye itself, that allows the gaze to come to a superior reality (sur-réalisme), that only film is able to show in a specific manner. Buñuel himself plays the man who opens the eye of a young women and puts the blade in position… This attack bypasses the distance between screen and spectator (the eye-witness) and exactly this is why this cinematographic performance can really count as the birth of cinematic modernity – the birth of a new seeing in pain. The attack on the eye of that woman is an attack to the spectator and leaves him with a terrifying after-image, that may heal over the years – but once seen, it will nevertheless become part of affective memory. The eye as wound – seeing as suffering. The cold eye of the camera instead is indifferent towards the affective dimension of its gaze. Whether it’s a face, or an anymnomous structure or landscape: the image suffers and reproduces itelf through the gaze of the machine. Whether in endless repititon, or in eloquent ways of high-culture: What once got through his eye, speaks through the screen with the spectator about the dazedness of a violence-addicted teenager.

In this sense, this curatorial programme aims to treat the videoworks* more as objets trouvées, – more as a reason to unfolf a meditation about the realtion of seeing and interpreting, than as museum art objects. The programme aims to give back to those videos their dignity to be trash.

Christopher Krause is working as a performer, dramaturgue and theorist and is mostly interested in Games, Fiction and the constitution of meaning through the interplay of language and objects. He is currently finishing his MA studies at the Institute for Applied Theatre Studies in Gießen, Germany.