We would like to inform you about the project of Vesna Bukovec, SCCA-Ljubljana’s webmaster and co-worker of DIVA Station. 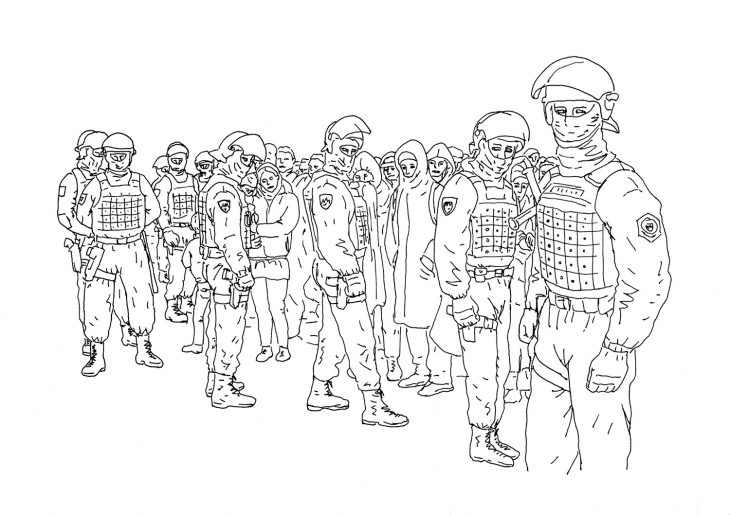 With the excuse of safeguarding its citizens and property, Slovenia is increasingly becoming a police state. The power of the repressive apparatus has been growing since the 2012/13 protests. In 2015 and 2016, the state was responsible for the refugee crisis turning into a humanitarian tragedy. The state has given the army police powers, while the police recently acquired a new water cannon, the use of stun guns is being discussed, and city wardens have increasing authority to take action. The new law against so-called illegal aliens will not only go against the constitution, but numerous international resolutions and conventions as well. After the horrors of the Second World War, the United Nations proclaimed the Universal Declaration of Human Rights, recognizing the inherent dignity and equal and inalienable rights of all people. Slovenia now intends to violate this. Moreover, as a consequence of also Slovenian actions the refugees caught on the cut-off Balkan Route are now fighting for survival under inhuman conditions. Overall, security is becoming the universal excuse given by the authorities for consolidating their power and increasing their repression, while human lives and destinies are once again being divided into more and less valuable ones.

The Universal Declaration of Human Rights

COMMENTARY IN THE ENTRANCE OF THE +MSUM
Vesna Bukovec: Safety for Whom?, 2016, digital print

In the entrance lobby of Museum of Contemporary Art Metelkova, +MSUM, a regular rubric is introduced that allows artists to comment, in a variety of media, formats, and ways of expression, on certain crucial moments and developments in the contemporary political landscape worldwide as they are reflected locally. Artists who have already participated: Đorđe Balmazović, Arjan Pregl, Via Negativa, Vladan Jeremić and Rena Raedle, Milan Erič.