Soros Center for Contemporary Arts – Ljubljana (1993–1999). Its Organisation and Impact

The exhibition was prepared and realized with the help of the participants of the World of Art School, Year 17: Tia Čiček, Kristina Ferk, Katja Filovski, Lara Mejač, Anja Seničar, Rea Vogrinčič 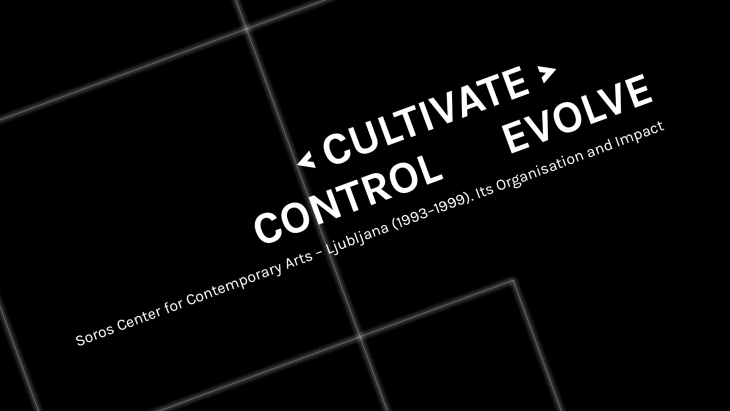 The exhibition control < cultivate > evolve by the World of Art, School for Curatorial Practices and Critical Writing looks into the work of the Soros Center for Contemporary Arts – Ljubljana*, which operated between 1993 and 1999 as one of the programmes of the Open Society Institute – Slovenia.

The exhibition focuses on several work segments of the Soros Center, its financing mechanisms, exhibition activity, art directions and co-creation of the local art scene. It sets (itself) questions as to whether the cultivation of new environments – both through the distribution of financial means and the consequent creation of different working conditions as encouragement in the development of specific areas – can be freed of ideological indoctrination and whether it already contains elements of control given the particular interests of its investors.

The exhibited artworks were either part of the so-called annual exhibition of the Soros Center in the 1990s or were produced with grants and travel grants. They establish a frame of reference that indicates the various aspects of the Center’s work, while at the same time addressing the cultivation that implicates both control and development. The work Uršula Noordung by the IRWIN collective refers to the launch of a new product with the appropriation of marketing strategies. The interactive video installation Big Brother’s Room by Nataša Prosenc Stearns points to crowd control as well as the individual’s decision to participate in the control process. In the 1990s, artists dealt with the issue of control differently than they do today when it is subtly ingrained in the very fabric of society and the technology of control. The two works, Transmission Interrupted by Michael Brodsky, and the video, The Park of Culture by Marko Peljhan, are therefore an early reflection precisely on the control over the world wide web and the media. Vuk Ćosić, on the other hand, considers working outside the established mechanisms of financing and the art system in his piece A day in the life of a net.artist. The selection of works is rounded off with the interactive sound piece To sleep – perchance to dream by the Circulation 2 collective, produced especially for the exhibition.

Artworks are juxtaposed with archival material, the analysis of directing art and video interviews. The archive provides an insight into the work of the Ljubljana Center, which was part of the network of twenty Soros Centers (SCCA Network), established in the 1990s in the former socialist and communist countries of Central and Eastern Europe and the Soviet Union. The SCCA network had a tendency to establish a narrative of contemporary art in the “East”, which it sought to achieve through regional networking, articulating artistic tendencies within a historical context, collecting documentation on artists and art, exhibitions and projects, its own magazine on contemporary art and the financing of cultural activities. The network played an active role in directing art, establishing parallel communication channels and promoting the use of new media and technologies.

The SCCA network, as Octavian Eșanu writes in The Managed Avant-Garde, can be understood as the institutional mechanism of a post-socialist transition whose primary role was the modernisation of the art discourse of the former socialist countries and the participation in the process of “normalisation” – a process that is in a society, where control is enforced through a scattered network of power and knowledge, primarily based on the norms of economic and social progress. The effects of the westernising tendency were more visible in some settings than in others. Because of the specifics of the local environment with its already established art infrastructure, cultural and social paradigm, the work of SCCA-Ljubljana should be seen as part of a wider attempt to establish hegemony within contemporary art.

_______________
*The Soros Center for Contemporary Art – Ljubljana was established in 1993 as one of the programmes of the Open Society Institute – Slovenia (OSI), whose mission was to spread the values of open society and the Western democracies by providing support to numerous individuals and non-governmental organisations (Ljudmila, Peace Institute, etc.). It was active in various fields – from education, the media, culture and art, civil society, to health and humanitarian activities. It attempted to introduce a Western cultural model in the countries that had undergone political and economic transformation in the 1990s, by using contemporary art as one of its tools. All the newly established centres were offshoots of the SCCA-Budapest documentation centre, established in 1984. Upon foundation, each centre received a guide with recommendations on the structure and content, which the individual centres adapted more or less consistently to the needs of the local environment. The work of SCCA-Ljubljana extended to the fields of preparing exhibitions (annual exhibitions and projects), conducting research, archival work (documenting the history of video) and education (World of Art). The distribution of support in the form of grants for art projects and a curatorial exhibition as well as non-programme costs also played a pivotal role. Due to the reorganisation of the Soros Foundations, the SCCA centres became independent in 2000. They began to function as non-government organisations, merging with bigger institutions, or they ceased to function. SCCA-Ljubljana was reorganised into the SCCA Center for Contemporary Arts – Ljubljana.

MORE ABOUT THE EXHIBITION