Presentation of archive, screening of video program and discussion about archiving

DIVA Station is a physical and web archive of video art which is being developed since 2005 at SCCA, Center for Contemporary Arts – Ljubljana with the intent to research, document, present and archive video/media art.

In partnership with Ursula Blickle Video Archiv and with the support of Skica the archive will be presented for the first time in Vienna. The program will include the presentation of DIVA Station by Barbara Borčić, program advisor, curator and head of video programs at SCCA-Ljubljana, a screening of curated program DIVA Station Presents IV and a discussion with Ana Čigon (artist), Barbara Borčić (curator, head of DIVA Station) and Gerda Lampazler (artist, co-head of Medienwerkstatt Wien). Discussion will be moderated by Claudia Slanar, the curator of the Ursula Blickle Video Archive at the 21er Haus – Museum of Contemporary Art. 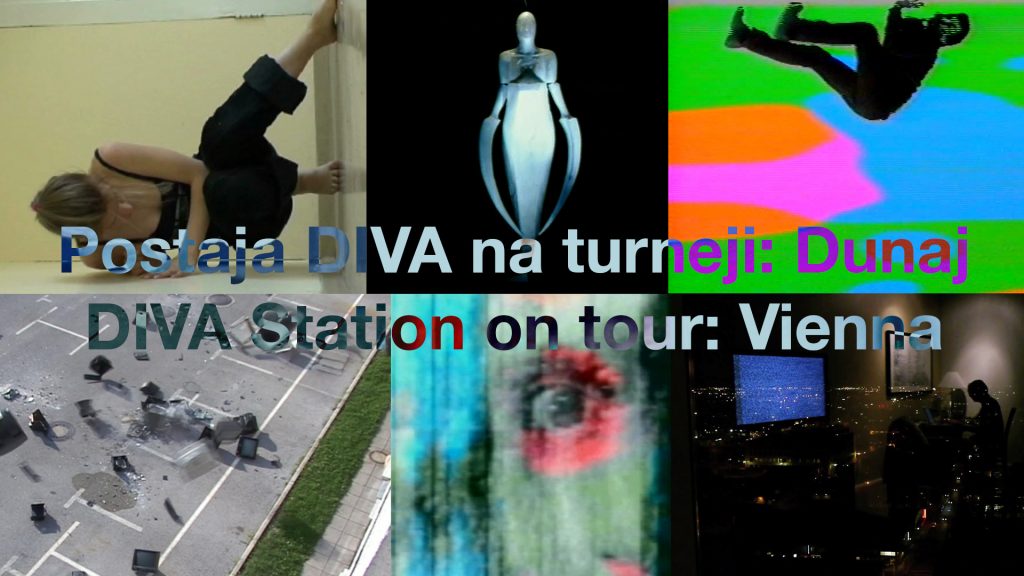 The program consists of 17 video works and is divided into three sections.

From analogue to digital

From memory to fiction

From impression to digression

The program consists of 16 video works and is divided into three sections.

FROM ANALOGUE TO DIGITAL presents various ways the artists involve in the topic of television, either as institution and mass media or its space, frequencies and aesthetics. Performative video using the method of measuring the edges of the screen was often used by video artists questioning television that captures reality. With the help of technical means and performative action, two artists from the program play with the perception of space and reality. Miha Vipotnik moves around the four edges of the screen, defying the laws of gravity and talks about television’s disapproving attitude to video and video makers (Space 2, 1986) and Ana Čigon tests a limited space and plays with our perception of reality (One More Kick, 2009). Sašo Sedlaček, the author of initiative to establish an autonomous media zone that has called attention to the opportunities made available with the transition to digital television, proposed to occupy a part of the newly released spectrum of the “public frequencies” before it falls prey to capital, and allocate it to art and culture. Unsuccessfully. Subsequently, he organized a happening in which analogue TV sets were collectively thrown out of the windows in one of Ljubljana blocks of flats (The Big Switch Off, 2011). Another area of particular interest in relation to TV aesthetics has been disruptive uses of the technology that turn things upside down: introducing error and noise into the codified world of protocols and interfering with or altering the signal, either mechanically with magnets or instrumentally with synthesizers and computers. This concept of “interference” underpins Luka Dekleva’s experimental practice, developing new methods of work in the process (Singing Bridges, 2008). Important News (2003) is a short and effective commentary on TV News and mass media manipulation. Vesna Bukovec makes it with humour and without words. On the other hand, Nika Špan has turned to Internet in search for material as a trigger for her witty animations. She downloaded found footage – an assortment of simulation-films and transferred it to the context of art (How to Socialise the Blues?, 2007).

FROM MEMORY TO FICTION presents various modes the artists cope and play with memory, personal or collective, and make narratives that are in-between reality and fiction. Taiga (1996) by Ema Kugler is a dark video landscape with human figures in menacing costumes, engaged in a game of dance and fight, pleasure and torture. Accompanied by a dramatic song, a row of vax dogs melt away, while the electronic effect only serves to accelerate the process. Created for a joint exhibition, the video Galapagos(2005) displays close-ups of an artificial installation of Galapagos Island with a volcano at its centre. Damijan Kracina and Vladimir Leben invented a variety of fantasy animals and added a DIY music piece, all with a good sense of humour and the absurd. Marko Kovačič is questioning the present through designing the fictitious Plastos civilisation that can belong to the past or future and he presents it in different formats and forms, as art installations, performances, publications and videos (Forth into the Past, 1995). Distant Memory (2014) by Valérie Wolf Gang is a video poetry, which speaks about the times that once were, about Yugoslav President Tito’s ship Galeb in between reality and the imaginary world of poetry.

FROM IMPRESSION TO DIGRESSION presents video works based on impressions that quite easily turn to digression, from cityscapes and highway walls to body and urban noise, control and photon noise. The Noise Factor(2012) by Nataša Prosenc Stearns is a meditation on personal space and time, surrounded by constant urban noise. The video, composed only by reflections in the windows, slowly proceeds from a poetic approximation and sharpening of the view to the city to the interior of a room and turns to white noise of television. The work by Urška Djukić, designed as a video painting in one sequence shot, initiates the question of persistence of man and nature in everlastingly exchange of power (Persistence vol.2, 2014).
Accompanied by a melodious music, An Autumnal Still Life (2002) by Neven Korda shows movement of the clouds, city vedutas, male masturbation and falling of leaves. Poetic and contemplative atmosphere is accompanied by electronic textures and reflections on the artist’s early video practice from the 1980’s. A vibrant video Broken h-h-h…egg (2000) by Zvonka T Simčič talks about the traps of mother’s love and problems with insemination through a gently erotic scene in a sensitive and painterly manner. Jasna Hribernikreflects on physical boundaries: the austerity measures against refuges in Slovenia is exposed by the granular photon noise, a video effect through which already anonymous persons gradually completely disappear (Tense Present – Photon Noise, 2015).
In Eight Minutes Around the World (1990-2000) is original documentary video patchwork with shots from various places in the world that Andrej Lupincvisited in the span of ten years. This exquisite video travelogue would work as an ideal visualisation of Levi-Strauss’s anthropological theory.

DIVA Station is a compendium of projects that seek to explore, preserve and disseminate Slovenian video/new-media art. It is being developed since 2005 at SCCA-Ljubljana with documentation and archive as well as research and curated programs that are accessible on-line and are open for cooperation. Today DIVA Station includes archive and mediateque with over 1000 video works by local and international artists, documents of events and works from European media archives.
We constantly add newly acquired works to the archive and promote an overall understanding of artistic oeuvre and video/media practices by organising discussions, presentations and exhibitions.
More: DIVA online, Videospotting

Barbara Borčić
Art historian and media theorist, advisor at SCCA-Ljubljana, Center for Contemporary Arts and head of video programs and video archive DIVA Station. She is active as a curator, lecturer and publicist. She has regularly lectured and published texts, e.g. Video Art from Conceptualism to Postmodernism, Impossible Histories: Historical Avant-Gardes, Neo-Avant-Gardes, and Post-Avant-Gardes in Yugoslavia, 1918-1991(Massachusetts: MIT Press 2003); What Television Can Be, And What Artists Can Use It For, Amuse Me (Ljubljana: Mestna galerija, 2013); The ŠKUC Gallery, Alternative Culture, and Neue Slowenische Kunst in the 1980s, NSK from Kapital to Capital. Neue Slowenische Kunst – The Event of the Final Decade of Yugoslavia (Ljubljana: Moderna galerija & Massachusetts: MIT Press, 2015). She is the author of the book Celostna umetnina Laibach. Fragmentarni pogled [Gesamtkunst Laibach. Fragmentary View], (Ljubljana: Založba/*cf, 2013). Recently curated (together with Igor Španjol) the exhibition Multimedia Practices and Venues of Production. The Eighties through the Prism of Events, Exhibitions, and Discourses – Part 2, Museum of Contemporary Art Metelkova, Ljubljana, 5 April–11 June 2017.