SCCA’s archive of video and new media art DIVA Station each year marks the World Day for Audiovisual Heritage – 27th of October, pronounced for the first time in 2005 by UNESCO. Our goal is to emphasize the meaning of archives and audiovisual material as an important part of cultural heritage.

This year the Slovenian Cinematheque and Kathrin Becker (n.b.k. Video-Forum Berlin), who will present the video program, join us at the celebration.

The program that consists of works from the n.b.k. Video-Forum and is selected by Kathrin Becker shows a variety of appropriation practice in video art from the 1970s to the present. 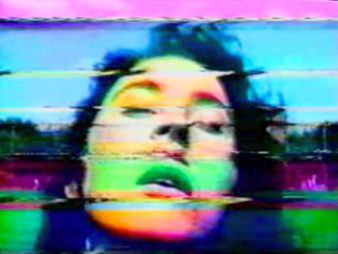 Nate Harrison: Aura Dies Hard (Or: How I learned to Stop Worrying and Love the Copy)
2010, 00:14:10, NTSC, colour, sound, 4:3
Nate Harrison’s prizewinning video essay ironically suggests an alternative perspective on video art: using representative fragments from bought copies of historical video works, he suggests concentrating not on the oft-cited ephemeral and immaterial quality of the medium, but on its material side, in particular existence of (often unauthorized) duplicates, which paradoxically promotes the auratization and mystification of video art. 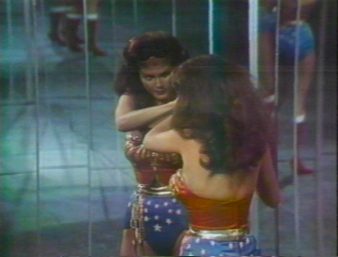 Dara Birnbaum: Technology / Transformation: Wonder Woman
1978, 00:05:55, NTSC, colour, sound, 4:3
In her video collages, Birnbaum deconstructs the manipulative potential of television and subvertes its produced gender stereotypes. Characteristic is the use of genre typical components from popular television formats. She montages footage from the US-American cult series Wonder Woman the feminist icon of the video art Technology / Transformation: Wonder Woman. With the help of repetition and fragmentation, she destroys the ideology lying at the foundation of the television images. 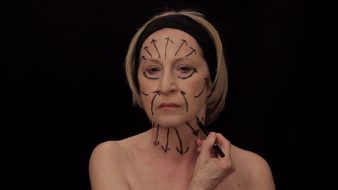 Sanja Iveković: Instructions No. 2
2015, 00:04:50, 1080i50, colour, sound, 16:9
n.b.k. Co-Production
Instructions No. 2 is a remake of Iveković’s famous work Instructions No. 1 (1976), in which Iveković is looking directly at the camera while painting black arrows on her forehead, cheeks, chin and around the mouth. The signs are reminiscent of instructions for applying skin care products and facial massages or of measures of plastic surgery. The concentrated process of marking takes place over almost the entire duration of the work. Towards the end Iveković rubs the markings into her skin with her hands until they are partially absorbed and partially leave faint traces on her skin. While the action from the 1970s is exactly repeated by the artist in the new video, the differences to Instructions No. 1 are showing both in Iveković‘s face and in the employed new digital recording technology. Both went through a process of transformation of almost 40 years. Iveković juxtaposes the aging process of the human being with the process of modernization of technology. 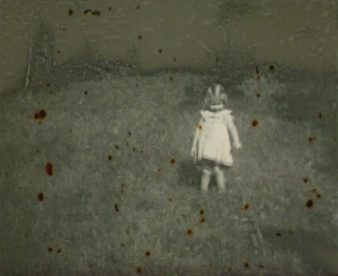 Karin Sander: Sigrid Ganz kleines Kino 1930
2009, 00:00:32 (loop), excerpt from pathé film of 1930 with traces of blue mould, stains, and scratches, transferred from 9.5mm to digital video, PAL, black/white, sound, 4:3
In Sigrid 1930, Karin Sander’s material is private found footage, a short excerpt from a 1930’s Pathé film from the artist’s family estate. The film shows a little girl in a white dress on a forest meadow. It happily throws up a ball, looks for it and throws it again as it runs towards the camera and the loop begins anew. In addition to the young actor, it is above all the traces that the film material has acquired over time that determine the aesthetics of the video: rust-colored mold marks, stains and scratches rhythmically flicker on the scene. As in her “patina paintings” or “utilitarian paintings”, for which Sander exposed white primed canvases in different places to the respective influences and let them emerge on site, here again the artistic criteria are beyond the creative act. The vulnerability of the medium of film becomes the content of the work with its own aesthetic value. 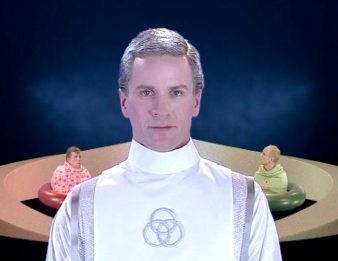 Bjørn Melhus: The Oral Thing
2001, 00:08:00 (loop), PAL, colour, sound, 4:3
n.b.k. Co-Production
In The Oral Thing, Melhus refers to the primitive and repetitive nature of certain television programs. In a surrealistic-seeming scene, he parodies the (typically American) phenomenon of the TV evangelist, but also the constant advertising and the talk show. All the dialogs come from the US daytime talk show Maury Povich, just as Melhus borrows the behavior of the grotesque figures, the staging of audience reactions, and the dramatic form of the jingle from talk show practice. In this “episode,” in which the delicate subject of incest is to confessed within socially desolate surroundings, Melhus takes on the role of the talkmaster, playing the part like a televangelist, also embodying the child-like talk show guests and the uniform audience: in so doing, he confronts us with the ambiguity of gender roles and the almost obscene brutality of television normality. 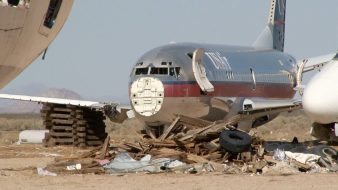 Hito Steyerl: In Free Fall
2013, 00:33:42, 1080i50, colour, sound, 16:9
In Free Fall sets the artist herself in the picture, as she makes a mistake when reading a text about the versatility of technical things: “The matter loves further” instead of “The matter lives on”. This mistake becomes the catalyst of the film’s various set pieces, interweaving the life and love cycles of things. An aircraft junkyard in the Californian desert and images of aircraft wrecks are a symbol of the current economic crisis and the stock market crash. The owner of the junkyard reports on economic successes in times of crisis: Hollywood, the Chinese – they all need expensive aircraft scrap for the global entertainment industry, be it in the form of spectacular pictures or in the form of the raw material aluminum, which is used as coating material for DVD production is recycled. In turn, the motif of recycling in In Free Fall is also present in relation to Steyerl’s artistic implementation when she uses found footage recordings and transforms them into new contextual relationships.

Kathrin Becker: On Program
1963 is usually named as the year of video art’s emergence, together with the manipulated televisions that Nam June Paik erected at Galerie Parnass in Wuppertal / Germany as well as the almost simultaneous presentation of disrupted television images by Wolf Vostell at Smolin Gallery in New York. Although video technology was only available on the American market for the first time after 1963, the history of video art also claims to include works that did not emerge with the help of video technology. The 1963 date implies that the critical engagement with television, which was declared “video’s frightful parent,” (David Antin) had a key part in the creation of video art and constructed a legitimating continuity beyond the history of technology. Many of the video artists saw the potential of the medium above all in taking direct influence on the mass media as part of a critical social practice. This critical engagement with the mass media led to the widespread practice of using „found footage“ from television or film industry in order to include it into a new unmasking context. After Erika Fischer-Lichte, also the re-enactment as another form of appropriation of existing imagery is able to create a specific relationship to the respective content.

Kathrin Becker is curator and author in Berlin. She studied Art History and Slavic Studies at the Ruhr University Bochum and the State Leningrad University. Since 2001 she is head of the Video-Forum of the Neuer Berliner Kunstverein (n.b.k.). She was responsible for numerous exhibition projects, publications and video screenings, most recently Ceal Floyer: Maximum Headroom (n.b.k. 2018); Eric Baudelaire: Walked the Way Home (n.b.k. 2018); Claire Fontaine: The Crack-up (n.b.k. 2017/18); Bani Abidi: An Unforeseen Situation (n.b.k. 2017); Rosa Barba: The Colour Out of Space (n.b.k. 2016); Halil Altındere: Space Refugee (n.b.k. 2016); Gerwald Rockenschaub: 751C064/045 (n.b.k. 2016/17); Elizabeth Price (n.b.k. 2016); A Sense of History (Nordstern Video Art Center Gelsenkirchen 2016); Feminisms (Nordstern Video Art Center Gelsenkirchen 2015). Already at the beginning of her curatorial career on the basis of her experiences in the cultural exchange between the Soviet Union and Western Europe in the 1990s, intercultural issues formed a focal point in the exhibition projects of Kathrin Becker, which criticized the redefinition of the concepts of culture in both territories after the dissolution of the political blocs through national or regional, but especially particular cultural-political settlements. Becker’s work culminated in transnational issues in the global context, focusing on the role of visual art in society and the complex of exclusion / inclusion in contemporary cultures.

Supported by: City of Ljubljana – Department for Culture, Republic of Slovenia Public Fund for Cultural Activities