We would like to inform you about the curatorial project of Barbara Borčić, program advisor and head of video programs at SCCA-Ljubljana. 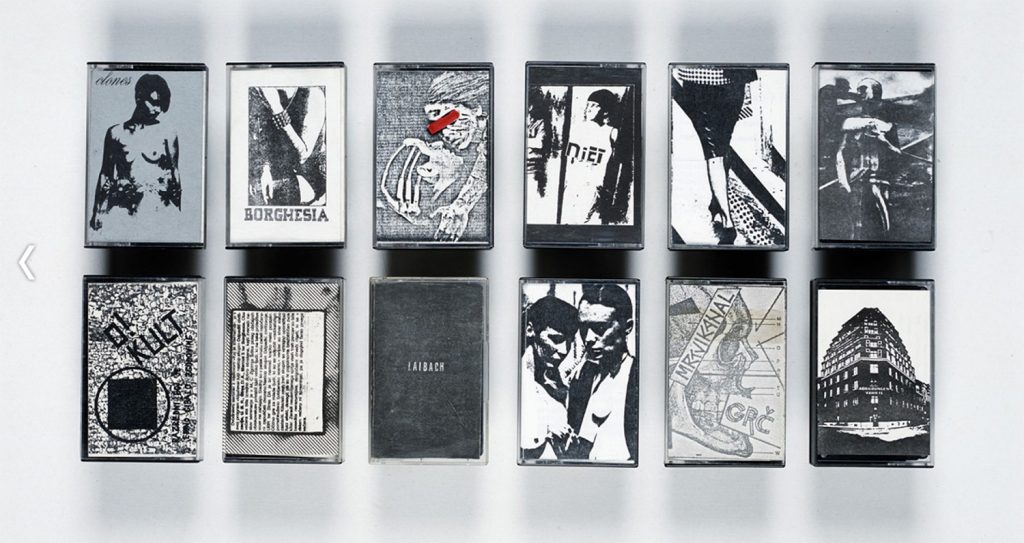 The exhibition Multimedia Practices and Venues of Production. The Eighties through the Prism of Events, Exhibitions, and Discourses shows how expanded the field of art was in the 1980s, with practices characterized by multimedia, self-organization, interdisciplinarity, trans-generational work, and collective authorship. The display concept foregrounds the typical venues and events, putting additional emphasis on selected artistic installations.

The exhibition si curated by Barbara Borčić and Igor Španjol.

A large part of the exhibition is staged at the Museum of Contemporary Art Metelkova (+MSUM), but a number of other venues feature equally compelling programs: the Škuc Gallery with film screenings, TV Slovenia with the themed program Platforma, Moderna galerija’s website with additional archival documents, and the DIVA Station, digital video archive by SCCA-Ljubljana.

As part of the exhibition DIVA station will be presented as a hosting video and new media archive with numerous works by artists working in the Eighties included in its archive.

Multimedia Practices and Venues of Production
The Eighties through the Prism of Events, Exhibitions, and Discourses

At the turn of the 1980s, the proliferation of contemporary international cultural movements and the opening of urban centers of culture for the young brought new ideas and a search for other channels of political and cultural work and forms of artistic production. It was a time of “the alternative scene”, the largest mass cultural movement in Slovenia to date. The theoretical writings of the New Left, the poststructuralist movement, and the Lacanian circle all made important contributions to the formation of such developments. Common to all of this heterogeneous production was a revolt against the cultural hegemony of the time; the political system, on the other hand, allowed such critique to project an image of tolerance.

The exhibition shows how expanded the field of art was in the 1980s, with practices characterized by multimedia, self-organization, interdisciplinarity, trans-generational work, and collective authorship. The display concept foregrounds the typical venues and events, putting additional emphasis on selected artistic installations. The multimedia theme is approached from two curatorial angles: via the alternative and/or subculture venues and via the institutionally and technologically supported practices. Together they reveal a media field constituted by the interrelations between production and presentation, concept and context, television and video. Individual instant media, e.g. photography, video, and Xerox, are not presented in their specific forms, but in the way they related to other media.

In presenting the venues of production and presentation, their key attributes are highlighted, derived from individuals or society: their specific aesthetics, narratives, forms and contents, and the modes, relations, means, and conditions of production. Although based on actual spaces and activities, they are described with generic names reflecting the most important practices: disco, gallery, studio, festival, other television, viewing room, reading room, cinema, and exit. To illustrate the synergy between different practices, the venues feature projects and documents, archival material, and projections of sound and text, images and light. A selection of reconstructed artistic projects is included as a constitutive part of multimedia venues and practices. The projects that have been selected – often early works and works characteristic of the artist’s multimedia practice – had an important role in determining the contexts of the venues. The exhibition aims to bring multimedia practices closer to the visitors through specific works, through atmospheric staging, and a display of documents and archives intertwining history and the narrative. The intersections of art and other cultural movements serve to arouse our curiosity, trigger further research, and enable us to encounter them also at the level of experience and pleasure in viewing.

More about the exhibition

Barbara Borčić, art historian and media theorist, program advisor at SCCA-Ljubljana, Center for Contemporary Arts and head of video programs and video archive DIVA Station. She is active as a curator, lecturer and publicist. She has regularly lectured and published texts, e.g. Video Art from Conceptualism to Postmodernism, Impossible Histories: Historical Avant-Gardes, Neo-Avant-Gardes, and Post-Avant-Gardes in Yugoslavia, 1918-1991 (Massachusetts: MIT Press 2003); What Television Can Be, And What Artists Can Use It For, Amuse Me(Ljubljana: Mestna galerija, 2013); The ŠKUC Gallery, Alternative Culture, and Neue Slowenische Kunst in the 1980s, NSK from Kapital to Capital. Neue Slowenische Kunst – The Event of the Final Decade of Yugoslavia (Ljubljana: Moderna galerija & Massachusetts: MIT Press, 2015). She is the author of the book Celostna umetnina Laibach. Fragmentarni pogled [Gesamtkunst Laibach. Fragmentary View], (Ljubljana: Založba/*cf, 2013).