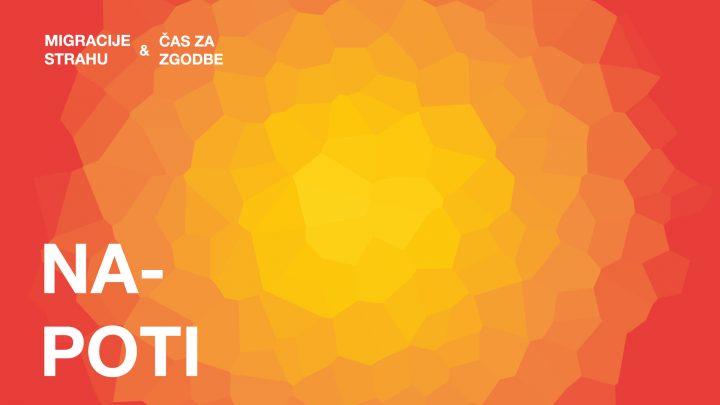 Under the joint title NA-POTI (IN/ON THE WAY) two exhibitions Migrations of fear and Story Time will take place in Slovenj Gradec. Both are focused on the theme of migration, refugees, people’s personal stories and experiences as well as on their consequences for both the political and economic image of Europe and the mental framework of the people and the citizens of Europe.

Story Time emphasises the significance of knowing the cultural histories of various nations and milieus, for it is precisely this knowledge that represents the first common point on the way towards understanding other cultures arriving in Europe with migratory flows. The invited artists will reinterpret cultural histories and cultural contexts from both European and Arabic worlds. They will emphasise questions related to postulates such as humanity, peace, war, good and evil, and, at the same time, they will interrogate the role of the individual and thus also the individual’s responsibility towards fellow human beings. The invited artists will convene workshops in pairs. In the workshops, they will use dialogue to develop new interpretations of traditional motifs in the light of the migrant crisis. Although some of the presented artworks touch upon global issues, most of the participating artists approach the topic from the individual’s position and experience of the present situation. At the residency the artists will present their working methods and the issues they have been tackling as well as the starting points for the newly conceived works, which will be included in the Story Time exhibition (12. 10., KGLU), which will be on display under the umbrella title of In/On the Way.

Fear is a basic, natural, defensive reaction to danger, which could reveal itself in acts of aggression, surrender, or retreat. However, in contrast to the inhabitants of Nature, fear has a much wider range of manifestations among human beings: from the mere physical annihilation of the bearer of the alleged danger to the more subtle ways of expression, such as hatred, prejudices, intolerance. Human fear could be justified, but also illusory, a symptom of a mental disorder or a result of some kind of manipulation, exerted on an individual by other individuals. It is not only psychological, but also social phenomenon, and, as such, it belongs to human history and society.
The 21st century, marked by the events of 9/11, gave worldwide rise to an ever-growing fear and anxiety, that were unknown to some extent to the western societies at the time, and that have recently taken unprecedented proportions, due to the terrorist attacks in Europe, the refugee wave and the subsequent humanitarian crisis. Various researches have shown that migration and terrorism are what the Europeans now fear most. However, fears of unemployment, of the deepening social inequality, of personal failure or financial ruin have been lurking in the old, as well as in the newly-born, capitalist societies for decades. The refugee wave only gave one last powerful impulse, which unlocked what has already been suppressed, more or less, for some time. Instability and constant threat gave impetus to the nationalist and far-right movements. The scepticism about the concept for a united Europe has intensified among the population of the EU member-states.
This is where the project Migrations Of Fear takes its starting point. It evolves around the real, phantom, individual or common fears in general, which have surfaced in the last few years. Those fears, and above all the ways the contemporary (European) society could find in order to defeat them, are the spheres, which the project intends to explore.

Vesna Bukovec is participating with a new series of drawings Birthmark (2017) which are exhibited in public space of Slovenj Gradec.

Vesna Bukovec, (1977, Ljubljana) graduated and completed her MFA from the Academy of Fine Arts and Design in Ljubljana. Her artistic work finds its expression in a variety of media (drawing, video, installation) and approaches (research, appropriation, participation, etc.). In the past one and a half decades she presented her work in numerous international and local exhibitions.