Exhibition of videopoetry and visual arts 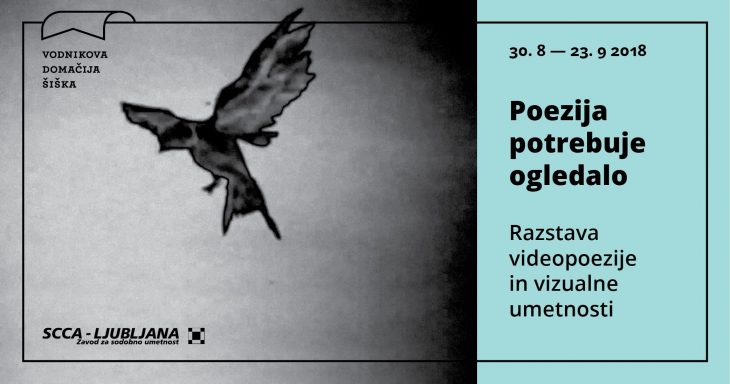 On the exhibition opening night (Thursday, 30 August at 8pm) Stella Ivšek aka VJ 5237 will perform a video mapping to an object in front of the gallery.

The exhibition Poetry Needs a Mirror (produced within the framework of the SCCA-Ljubljana exhibition program) is focused on videopoetry. We selected four videos that – in addition to the synesthetic experience of poem/text, sound and images – include also ‘a narrative and expressive plot’, such as suggestive narration, kinetic text, visualization of poem coupled with the presentation of errors and the reduction of a poem to its erasure. Moreover, the exhibition presents also visual projects that seem to be associated with the selected pieces of videopoetry, thus creating an extended poetic experience.

In the video Shotokan (Gorazd Krnc, poem Peter Semolič), the poet’s voice is seducing the listener, while the image leads the viewer to inconceivable space-time. The publications of IGNOR Festival with their various visual expressions and poetic voices are exhibited here for viewing and reading. While a site-specific intervention with found (post-it) notes by Tisa Neža Herlec is designed to interact with the visitors.

A different visual atmosphere is found in the video Falling / Padanja (Toni Soprano, poem David Bedrač). The image is reduced to computer-generated letters falling into space, while the video is slowly progressing to ‘a white page with a white poem‘.

Video Šalamun is dead full stop end of the debate / Šalamun je mrtev pika konec debate (Rene Puhar, Hana Repše, Miha Sagadin, poem Dejan Koban) is the visualization of Koban’s poetic language. The video is focused on open form of his poem written without punctuation marks, simultaneously highlighting the added proofreading marks. The error is integrated also into the artwork of Alenka Pirman Arcticae horulae, the dictionary of German Loanwords in the Slovene language. The displayed open pages of the dictionary draw attention to the artist’s (self) ironic additions coupled with some newly-marked ‘errors’ of the dictionary entries.

Video Bird / Ptička (Nataša Berk, poem Anja Golob) is a static image of the moment when the poem vanishes and only gestures remain. One can merely imagine the poem. Similarly, the artistic tandem Small but dangers (Mateja Rojc, Simon Hudolin Salči) concealed the story of a damaged B-W photography of Log pod Mangartom, only to be revealed from additional sources. On the exhibition opening night, Stella Ivšek aka VJ 5237 will perform a video mapping to an object in front of the gallery.

Similarly as stated in the verse “life needs a mirror” by Anja Golob, also poetry needs a mirror. We are used to creating an image through an intimate act of reading. With videopoetry and other visual projects displayed in the gallery we tried to encourage the poetry to look at several different mirrors. 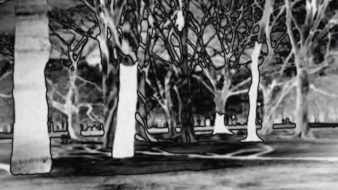 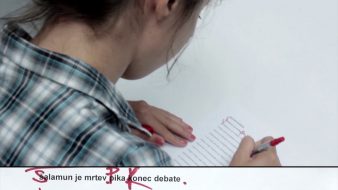 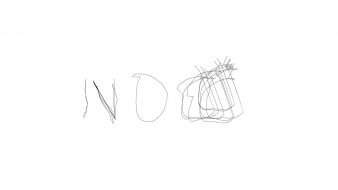 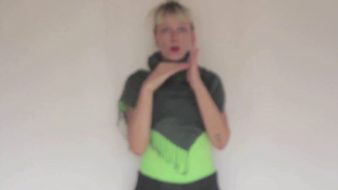 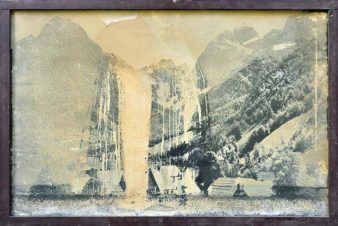 Small but dangers (Mateja Rojc & Simon Hudolin Salči), Log pod Mangartom
ready-made, damaged B-W photography, 68,5 x 103 cm, 2005
.
Once somewhere a butterfly has flown and then a glass on photography broke. As time passed, the weather used the advantage of human carefree attitude. Humidity has predicted the fatale landslide through a hole in the glass of the photography of Log pod Mangartom at Škofja Loka railway station. One February night in 2005, the artists stole the photography, and were caught by the police. The act triggered an avalanche of events, which are uncovering the unfeasible human need to understand and control uncatchable chaos, which master our everyday.
(source: Small but dangers) 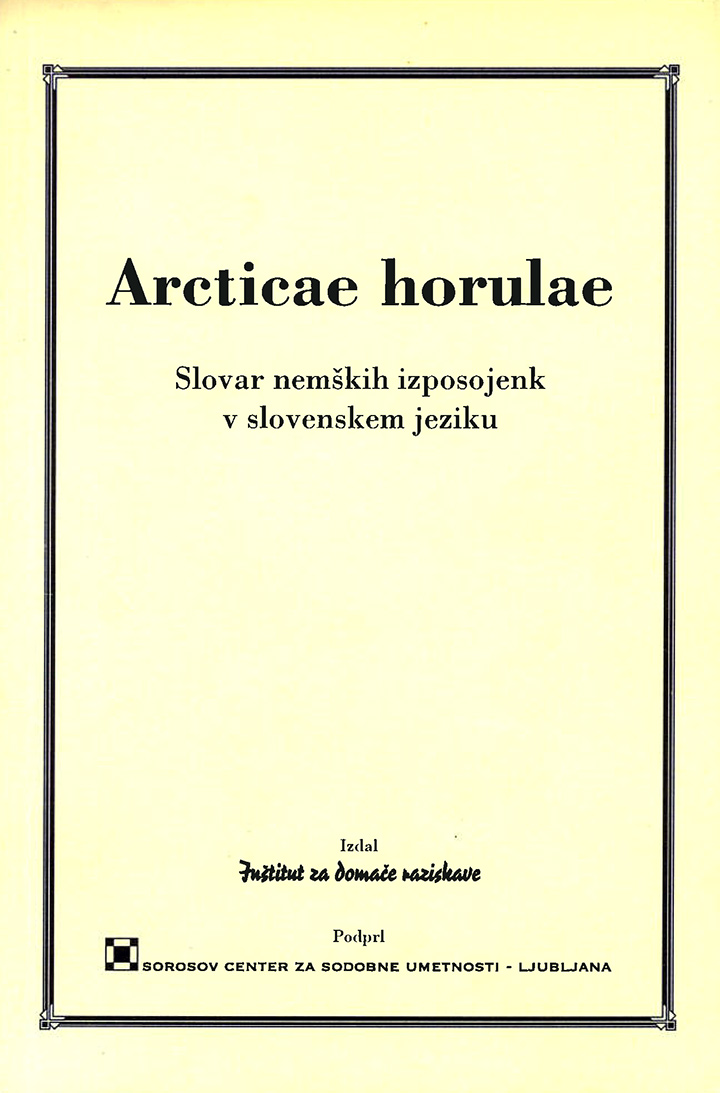 Alenka Pirman, Arcticae horulae
dictionary of German Loan words in the Slovene language, 1991–2005
.
The core of the project was the artist’s private amateur collection of Germanisms – loanwords from German used in colloquial Slovene. The collection was presented to the public in three formats over a period of ten years. In 1995 a set of carefully selected words was cross-stitched onto forty small banners, which were mounted on brass stands. They were displayed on the ends of the desks in the Main Reading Room of the National and University Library. In 1997, the entire collection (2.084 words) was published in book form as a small dictionnary of German loanwords, under the title Arcticae horulae. The book attracted enourmous attention, and the edition of 1.000 copies sold out in less than two months. Finally, in 2005, an e-book and the digitalized archive (produced by SCCA-Ljubljana) were published on internet. The artistic process behind the project overlapped with the domain of science (lingvistic research) and exposed the responsibility of the artist. On 8 January 1998, just three months after the book was published, the renowned etymologist Dr Marko Snoj wrote a harsh critique over the work in the main Slovene newspaper. For the artist, this signalled the end of the project. The project is now a part of Moderna galerija Collections.
(source: Alenka Pirman: Collected Works, MGLC, 2015) 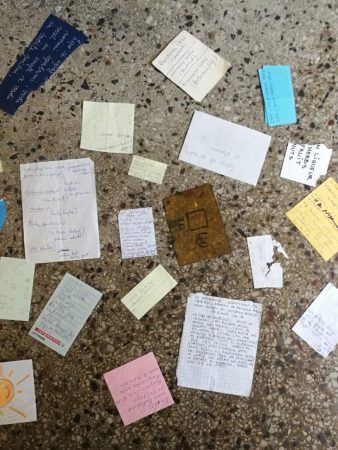 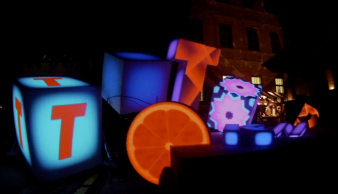 Stella Ivšek, Video Mapping VJ 5237
video mapping, 2018
.
On the exhibition opening night the artist will perform a video mapping to an object in front of the gallery. Documentation of the video mapping will be  exhibited in the gallery space. 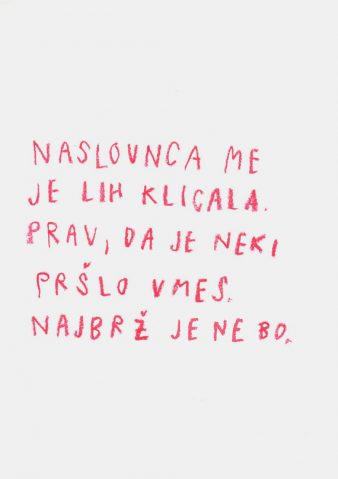 Guided tour with curator and artist / poet Dejan Koban
Sunday, 2 September at 11am

Guided tour with curator and artists Gorazd Krnc and Tisa Neža Herlec
Sunday, 16 September at 11am