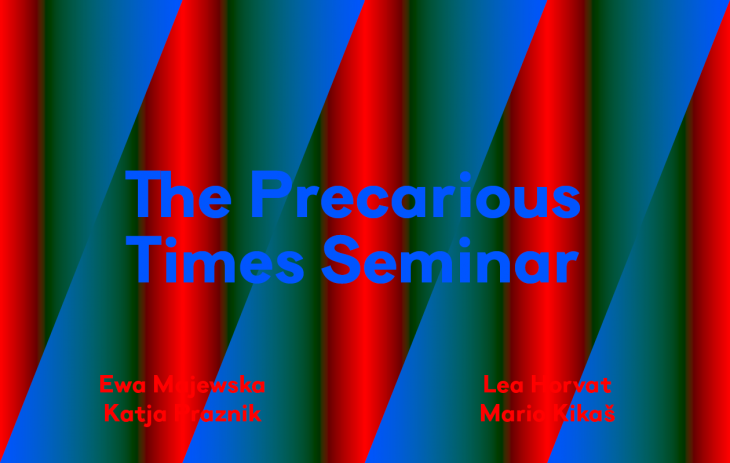 The Precarious Times Seminar is a series of online lectures focused on problems surrounding creative and intellectual work today, shaped by growing uncertainty, social divisions and regression of living and working conditions. Precarity is a term often employed to describe the prevailing state of social and economic insecurity. It is also frequently used to describe art work and other forms of cultural, creative, and intellectual work strongly shaped by irregular working hours and inadequate pay, exhaustion, competitiveness and constant distress. The programme aims to employ a feminist perspective to look at working conditions from the margins and highlight gendered experiences of precarity in today’s neoliberal society. Therefore, special attention will be given to connections between cultural work and invisible, unpaid, and gendered forms of labour – such as affective labour and labour of care.

Organised by Kurziv – Platform for Media, Culture and Society and Center for Contemporary Arts SCCA-Ljubljana in cooperation with Human Rights Film Festival, The Precarious Times Seminar brings together contributions by cultural theorists and researchers from Poland, Slovenia and Croatia. The lecturers will shed light on the precarious and dangerous social situations into which the (cultural) workers today are thrown and try to offer some considerations on the forms of resistance of individuals and communities.

The programme is divided into two thematic blocks devoted to analysing the process of precarization as it is shaped by class, gender and other axes of social marginalisation. The first block will look at precarity and labour organising in culture with contributions from cultural theorists Ewa Majewska and Katja Praznik, while the second brings together micro- and macro-perspectives on specific spheres of intellectual and cultural labour with presentations by researchers Lea Horvat and Mario Kikaš. Curator and cultural worker Barbara Gregov will moderate the discussion.

The seminar will be held in English via Zoom. To attend, please apply at: info@scca-ljubljana.si / hana@kulturpunkt.hr.

Ewa Majewska: Gender and Precarity in the State of Exception. A Guide for the Perplexed.

In times of the state of exception, the processes of precarization established within the turn to neoliberal capitalism are sharply intensified. Precarity – the gendered and racialised experience of insecurity, invisible and marginalised labour, exploited by states and corporate capital in their process of accumulating the surplus value, only gets intensified with the installation of fascist governance. Fascist tendencies of today’s right-wing governments and racist and anti-gender movements provide legal frameworks as well as an ideological justification for the intensified processes of externalisation of care and affective labour onto those already excluded and marginalised – women, the LGBTQ+ people, migrants, and refugees, as well as the poor. In such conditions, the income discrepancies only grow, thus further enhancing the sharpening of class divisions. In neoliberalism, we observe the radical return of traditional gender roles and models. In her lecture, Ewa Majewska will draft the general tendencies of precarity under the state of exception and some guidelines for the resistance as it is practised in various sectors of today’s societies.

Prof. Ewa Majewska is a feminist theorist of culture based in Warsaw. She taught at the UDK Berlin, Universities of Warsaw and Kraków; she was a visiting scholar at the University of California, Berkeley; ICI Berlin and IWM in Vienna. She published Feminist Antifascism. Counterpublics of the Common (Verso, 2021) and five other books, as well as numerous articles and essays in journals, magazines and collected volumes, including e-flux, Signs, Third Text, Journal of Utopian Studies and Jacobin. Her research focuses on archive studies, dialectics of the weak, feminist critical theory and antifascism. She co-curates the exhibition of Mariola Przyjemska’s work at Warsaw Zachęta Gallery (2022–2023). She currently works at the University of Social Sciences and Humanities University in Warsaw (SWPS) on the project Public against their will. The production of subjects in the archives of “Hiacynt Action”. (Photo: personal archive)

This lecture builds on the Marxist feminist approach to problems of invisible, essentialised labour, including art work, to examine the mechanisms that drive its perennial exploitation. Why do we have to divorce art from ideas about work and labour organising? What do art workers have to lose by a critical approach to notions of creativity and merit-based remuneration models? Should we think of creativity also as a form of labour requiring labour standards? Countering the pervasive ideology of creativity and artists as model neoliberal workers thriving on freedom, self-reliance and autonomy, this talk will demonstrate why relying on individualised notions of creative expression is counterproductive to labour organising in the arts and creative sector. Presenting a critique of human as enterprise and the ongoing transformation of employment relations, Praznik will examine why they misconstrue the position of art workers in the class relations and social process of production.

Katja Praznik is the author of Art Work: Invisible Labour and the Legacy of Yugoslav Socialism (University of Toronto Press, 2021) and The Paradox of Unpaid Artistic Labor: Autonomy of Art, the Avant-Garde and Cultural Policy in the Transition to Post-Socialism (Založba Sophia, 2016). She is an associate professor at the University at Buffalo Arts Management Program and the Department of Global Gender and Sexuality Studies. Before moving to the US, she worked as a freelancer in the Slovenian independent art scene. She was the editor-in-chief of the Maska journal, a dramaturge in dance performances, and actively engaged in the struggles for improving the working conditions of art workers at Društvo Asociacija. She lives between Buffalo, NY and Ljubljana. She is currently involved in organising art workers in Slovenia as the founding member of the recently established art and creative workers’ union Zasuk, where she serves as a member of its workers’ committee. (Photo: Jaka Babnik)

We are used to thinking of intellectual work as a time-consuming procedure demanding our undivided attention. Any interruption would mean failure or sloppiness in this conventional, patriarchal understanding of intellectual work. However, working without or with little interruption is a privilege of a few. We will discuss a range of interruptions, many of them gendered: speakers interrupted with “a comment rather than a question”, collisions between care work and intellectual work, the new normal of a funding hiatus in neoliberal academia, self-distractions, taking breaks to take care of ourselves, and breaking with established paths of institutional power. However, the distinction between flow and distraction is not always straightforward. Experiencing co-dependencies might help refine our thinking in pursuit of inclusion and equality. Path-breaking and interrupting business are crucial for change. Finally, we will reflect on the very nature of interruption; is our messy life interrupting work or is it the other way around?

Lea Horvat is a postdoctoral lecturer and researcher at Friedrich Schiller University Jena, Department of Cultural History. She is currently working on her habilitation project, A Taste of Caffeinated Emancipation: Coffee, Cafés, and Gender in the Habsburg Empire. She studied Art History and Comparative Literature in Zagreb, Belgrade, and Berlin. She holds a PhD in History from the University of Hamburg. Her PhD project, A Cultural History of Mass Housing in (Post-)Socialist Yugoslavia, was supported by the German Academic Scholarship Foundation. She was a fellow at the Humboldt University of Berlin, the University of Leipzig, and the Iowa State University (College of Design). She is the co-editor of Krilo, a platform on feminist readings of popular culture. Her first book, Nepraktični savjeti za kuću i okućnicu: feministička čitanja ženske svakodnevice (Impractical advice for the house and garden: feminist readings of women’s everyday life), was published in 2020 with Fraktura. (Photo: personal archive)

Mario Kikaš: Runaway Production: The Global Division of Labour in the Film Industry

The talk will address global changes affecting the film industry in the last few decades, emphasising territorial shifts and their effects on film production’s economic and social organisation worldwide. This model of dislocation of production in the screen industry from its historical, economic, and cultural centre, i.e., Hollywood, and studios set there, is often labelled as a runaway production. Through comparison of different case studies, Mario Kikaš will demonstrate changes in the production of a film on a macro level (competitiveness among different nation-states and regions, trade policies, the relationship between transnational corporations and nation-states) but also on a micro-level (role of the subcontractors in the production chain, division of labour on the production sets, and unionisation and protection of labour rights of film workers). The lecture will be grounded in the interdisciplinary theoretical apparatus of economic geography, film production studies, political economy, and the global commodity chain paradigm.

Mario Kikaš is a freelance journalist and research fellow in cultural sociology at Nord University (Norway). His favourite research areas are the history of cultural policies, the political economy of cultural and media industries, and labour history. (Photo: personal archive)

Barbara Gregov is an author, curator and cultural worker. She is a member of the curatorial team of the international photography festival Organ Vida and works as a program coordinator in the LGBTIQ organisation Zagreb Pride. (Photo: Ive Trojanović in Karla Jurić, Organ vida)

The Precarious Times Seminar is organised by Kurziv – Platform for Media, Culture and Society and SCCA-Ljubljana in cooperation with the Human Rights Film Festival. The Seminar is part of the curriculum of the Kulturpunkt’s Journalism School and the World of Art School, but it is also open to the general public.

The programme is supported by: City of Ljubljana – Department for Culture and Kultura Nova Foundation.