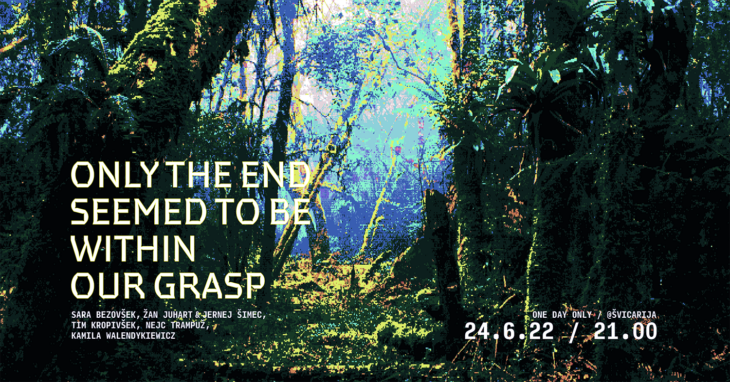 You are cordially invited to the one-day exhibition event Only the End Seemed to Be within Our Grasp on Friday, June 24, 2022, between 9 pm and midnight in Tivoli Park in the immediate vicinity of MGLC Švicarija. The exhibition presents recent works by a group of young artists, in which they address the relationship between nature and technology, our attitude towards the living environment, the transition from the analogue world to virtual reality and the state of nature in cyberspace.

The initiative for the group exhibition, which would make a transition from the gallery space into the natural environment, came from the artists themselves. The collective initiative triggered the reverse process of operation, from the temporary collective of young artists to the involvement of non-governmental organisations and a public institution. At the same time, it complicated the usually demarcated roles within the production of the exhibition project. We are preparing the exhibition event as a team, intertwining curatorial, production and organisational roles. Such non-hierarchical collaboration and mutual support reflect the necessary changes that we, as a society, have to make in order to prevent the imminent catastrophes on the horizon.

In case of rain, the works of art will be presented in MGLC Švicarija.

The one-day exhibition project is a unique collective experiment with a strong environmental message. The participating artists come from a young, engaged generation that has grown up in a digital world. They are friends and colleagues who work together on various art projects. The exhibition presents their recent works in which they question the relationship between nature and technology, our attitude towards the living environment, the issue of the transition from the analogue world to virtual reality and the state of nature in cyberspace.

Their observations lead to questions about the future not only of humanity and society, but also nature, inseparably connected with them. of their inseparable nature. Artists are experimenting with the placement of technologically generated representation into the natural environment. They are wondering how our perception of nature and technology is changing in an increasingly rapidly evolving post-natural world. They are interested in whether technological progress that transcends individual consumption and the generation of the profits for large corporations is possible.

The WorldCrash.img project by Nejc Trampuž is an interactive installation that deals with the impact of technology and consumer society on our environment and explores the reciprocal impact of the changed surroundings on humanity. The artist captures images from unsecured web cameras that include a wide range of artificial as well as natural landscapes and animals, sometimes even people. By deliberately causing digital errors — glitches, which he achieves by interfering with the code of the image file, the images are transformed into each other. The author sees the error as a tool that can be used to discover new territories and achieve completely unexpected goals, which resist digital control due to limited recognition of images.

In her complex, visually saturated video A Quake in Being Kamila Walendykiewicz wonders what will be the nature of the future in the post-human world. The video is part of the wider online project post_planet (www.postplaneta.com), which constructs the digital world of the future. In it, the author explores the boundaries between the physical and computer-generated world. She is interested in the data durability and the numerous lost digital images on the Internet. The video consists of three chapters that highlight the attitude towards the living environment and discuss the transition from the analogue world to cyberspace.

Sara Bezovšek is also wondering about the future of life on the planet, by using content found online as well. The video www.nuclear-winter.world is a derivation of the interactive story game Nuclear Winter, which is part of the artist’s long-term interactive online project SND (Learning about nature and society). The video in the form of a compact collage of quotes from film and Internet culture depicts a possible scenario after a nuclear war, leading to a nuclear winter and global cooling event, respectively. It would be followed by a nuclear spring and a summer with elevated temperatures, which would erase the little life that would have been preserved until then.

Today’s natural world is already almost overwhelmed by anthrophony, the sounds produced by humanity. This fact is addressed by the interactive light and sound installation The New Natural World by Tim Kropivšek. The ongoing extinction of animal species due to human occupation of their habitat is demonstrated by the small test tubes used in the installation. As a hint at the scientific and technological processes of storing genetic material, the test tubes contain electronic parts to remind us that in the near future we will be able to come into contact with most animals only through digital interfaces. The change of light and the sound distortion of animal voices upon human contact with the test tube represent our harmful actions and the suffering we cause to the rest of the living world. The work reminds us that we are already deep in the period of the sixth mass extinction of species, mainly due to human activity.

Technological progress is often associated with the progress of society. Žan Juhart and Jernej Šimec are wondering what progress means when the most basic human needs are not met in the entire society. Their project Absent Events, is a live video broadcast of their performance of building a shelter from natural materials in the forest. They build it dressed in a special green suit, which, with the help of the green screen effect in the broadcast, causes their digital erasure. Nature thus seemingly builds a shelter on its own and the question arises as to whom. Perhaps for the human of the future who will (again) need shelter in the forest due to the imminent ecological catastrophe, or as a sign of solidarity for refugees and migrants who are forced to travel secretly through the forest due to restrictive migrant policies and police violence.

The artists address the issues of living in a modern post-natural, technologically marked world and our understanding of this through digital interfaces. They face digital reality, the speed and abundance of data, and their distortion. The works are marked by a sense of loss, helplessness, anxiety, frustration, fear of imminent catastrophe and extinction. They draw attention to the problems we are already facing as a community and paint a picture of a world without humanity, even without life, and explore the self-sufficiency of nature and the fundamental need for shelter and survival, which is common to all living beings, but humanity expansively accommodated it to its (apparent) benefit. Artists reveal and foretell the consequences of our obsession with (digital) technology, with inventions that were designed as a tool to aid, but soon turned into weapons of conquest.

By placing their works in nature, the artists want to highlight the human desire for dominance over everything that surrounds us. By interfering with it, they want to illustrate the boundless human desire to colonize the other, be it nature, its resources, animals and plants, or a fellow human being, a different culture or society. Through this spectacular gesture, which attracts viewers to the digitally inhabited forest, the artists are criticizing our own dark motives, which are an integral part of society, and outline the traces we leave with our actions. With all the unknowns of technology and the future, as Kamila Walendykiewicz tells us in her video, “only the end seemed to be within our grasp”.

WORKS AT THE EXHIBITION 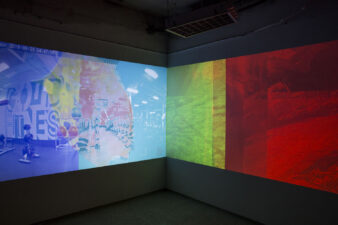 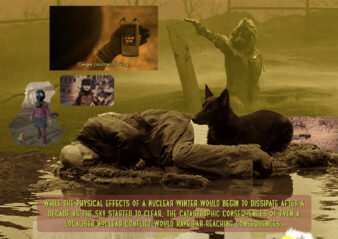 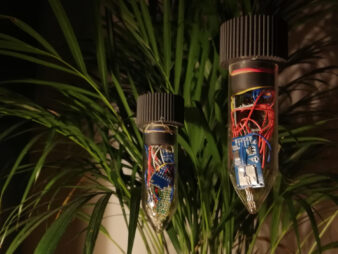 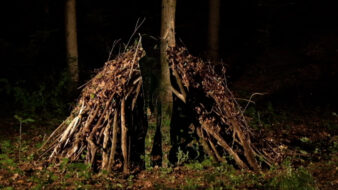 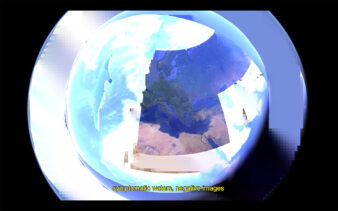 Kamila Walendykiewicz, A Quake in Being
Video, 2022
The installation is part of the project www.postplaneta.com and master’s thesis.
Mentor: Jan Mioduszewski, Academy of Fine Arts Warsaw

Sara Bezovšek (1993) is a visual artist working in the fields of new media, experimental film and graphic design. Since 2018, she has had several group and solo exhibitions. The latter took place in the Aksioma project space, the Camera gallery in Kino Šiška, in GT22, Osmo/za, the SLOART gallery and DobraVaga. She also received the Prešeren Student Award, participated in the Kiblix festival, The Wrong Biennale and exhibited at the Feral File online gallery. In 2021, she received the grand prix at the FeKK festival for her short film www.s-n-d.si, and in 2022 she was nominated for the OHO Aaward, participated in the BIO27 with the Garnitura group, and her SND project was presented on the Do Not Research online platform.
sarabezovsek.com

Tim Kropivšek (1993) is a multimedia artist and a musician. In 2014, he began his studies at the Academy of Fine Arts in Ljubljana, majoring in Photography. In 2016, he participated in the group exhibition Tradition at the Ars Gallery. In 2017, he graduated with the work Elevator, an interactive installation that thematizes ‘awakening’ into the subconscious. In 2018, he exhibited at the group exhibition Sweet Colours as part of the Lighting Guerrilla Laboratory, with a generative interactive installation Energy Wasted. In 2020, he developed the Quicktime programme, in which he explores the topic of procrastination.
tim-kropivsek.wixsite.com/portfolio

Nejc Trampuž (1993) is a multimedia artist and photographer. He graduated and obtained his master’s degree at the Academy of Fine Arts in Ljubljana, majoring in Photography. He received the ALUO award for his master’s thesis. His focus is on environmental issues, and the works are often manifested in colourful interactive visual-sound installations that explore the boundary conditions of the photographic medium, transcend it and move into other media and approaches (video, sound, projection, light, collage, automation, interactivity, use of modern technology, glitch, etc.). He has exhibited both abroad and in Slovenia, including +MSUM, Simulaker Gallery, Layer House and TAM-TAM Street Gallery, SLOART, MGNG, at the IZIS festival; at the OFF_festival in Bratislava he received an honourable mention.
instagram.com/nejctrampuz

Jernej Šimec (1997) is a visual artist working in the field of photography and experimental video. He graduated at the Academy of Fine Arts in Ljubljana, majoring in Photography. In his work, he deals mainly with human’s attitude towards nature, the distinction between anthropogenic and natural, and the perception of the natural. In 2021, he exhibited at the Alkatraz Gallery at the student’s exhibition No Loitering Today, Cataclysm is Nearby.
instagram.com/jernejsimec

Kamila Walendykiewicz (1997, Poland) has been a student of the Academy of Fine Arts in Warsaw since 2017, majoring in Painting. She is currently on an Erasmus+ exchange at the ALUO in Ljubljana. She is the co-founder of the activist group Rainbow and student gallery Someday It Will Be in Warsaw. She is mainly engaged in painting, but also researches the concept of post-photography. Her artistic practice is inspired by the theory of post-humanism and post-internet aesthetics.
instagram.com/walendykiewicz, postplaneta.com

Žan Juhart (1995) is an intermedia artist, who works mainly in the field of photography. His main focus is the analysis of spiritualist practices and mystical experiences and their connections with science. He graduated in Media production from IAM – Institute and Academy of Multimedia and Design from the Faculty of Design. He is currently completing his master’s degree in ALUO, majoring in Photography.
zanjuhart.com