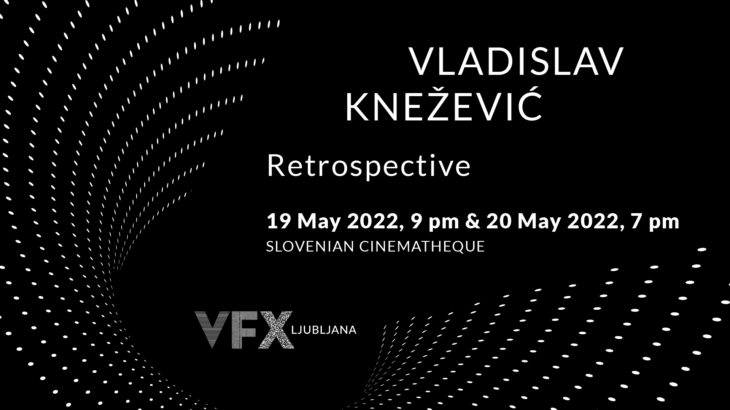 The artist in focus of this year’s V-F-X Ljubljana festival comes from Zagreb. The renowned Croatian author Vladislav Knežević has been creating in the spirit of avant-garde use of film language since 1988. His Retrospective will be screened in two parts, on Thursday and Friday. Part of the programme will be shown in stereoscopic 3D projection. In addition to his older works, we will premiere his recently completed film Null Cone (2022). At the VR Point in the Cinematheque café you will be able to immerse yourself in a 360-degree screening of his film Aqualia (2021) during the whole festival. On Friday we are preparing a Masterclass with the author, intended for young artists and filmmakers. In the masterclass, we will take a look at his creative process and the conceptual designs of works that emerge at the intersection between science and art.

The film trilogy consists of unique chamber science fiction / experimental / animated hybrids. The first two films will be screened with a stereoscopic 3D display system.
Screening in the presence of the author. 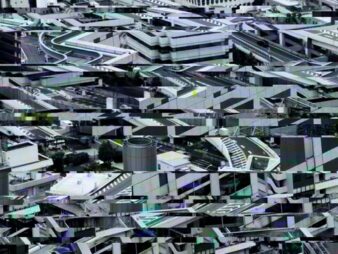 A.D.A.M
Vladislav Knežević, Croatia, 2014, DCP, 12′ 45”
______________
A.D.A.M. is a film about the attempt to obtain control over a monitored piece of space junk which unexpectedly gained consciousness. The fall of an asteroid mining device named A.D.A.M. (Autonomous Drone for Asteroid Mining) causes the strengthening of its cognitive processes and activation of the autonomous mode. This leads to its refusal of communication with the satellite company operators. An atlas of intensive empty landscapes, urban megastructures and lost horizons immersed in a cacophony of languages, codes and communication networks forms the basis of this metafiction about the relationship between man and machine. Their joint trajectory toward overload starts with the act of leaving the sea, continues by passing through mythic ambients and finally ends with the arrival in the unstable and saturated space of contemporary hyperurbanism. Efficient solution algorithm: Non-existent. 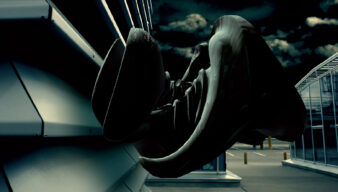 The Paracosmic Document
Vladislav Knežević, Croatia, 2018, DCP, 19′
______________
Gravitational waves are passing through every existing dimension, even the almost undetectable ones. The scientific experiment, in its basic utilitarian nature, is aimed at the understanding of the multidimensional structure of things and has the potential for an uncanny experience. The device has successfully detected the unknown dimension at an infinitesimal scale and set up the parameters for magnification and tracking of all the activities in the ambient of non-place visible to us. By its typology, the universal architecture of non-place is optimised for documenting the unknowable and determining the topology of the unexpected. The film follows the course of the intense activities of the entities present in the N dimension that generate a sort of beyond-human experience. 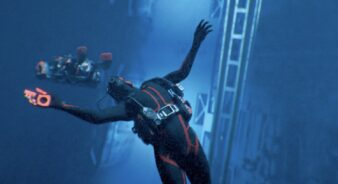 Aqualia
Vladislav Knežević, Croatia, 2021, DCP, 20′
______________
In an underwater robotics test pool, a machine infected by an unknown biological conglomerate conducts a fatal manoeuvre. The new compounds create their own forms, self-sustainable, self-forming and adaptable. The Anthropocene, a human product, has opened a possibility for the extension of the body without organs to host other forms of life, inhumanly wondrous and unpredictable.

The first two films refer to the time of the early avant-garde and art in the period 1900-1930. The last three films rely on the tradition of structuralist film and the potentials of the film medium in a unique atmosphere of ambience, typical of hard science fiction, with extremely minimal film procedures.
Screening in the presence of the author. 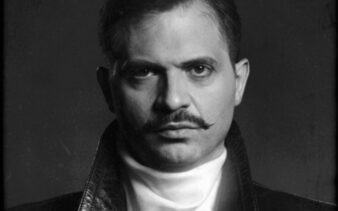 Colonello Futurista
Vladislav Knežević, Croatia, 2019, DCP, 18′ 48”
______________
The launch of an espionage balloon from an Italian village, located opposite the southern part of the Istrian peninsula, marked the beginning of a most unusual adventure for aviation officer Giuseppe Rosignoli. The decision to go on a reconnaissance mission over the heavily fortified Austro-Hungarian military zone of Pula was made several months before the Kingdom of Italy entered World War I in 1915. 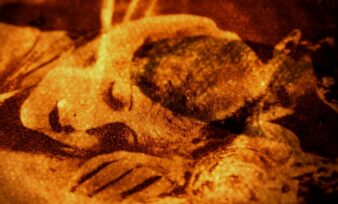 Arheo 29
Vladislav Knežević, Croatia, 2010, 35 mm, 9′ 30”
______________
If the new world ever existed, it is still hidden way behind the horizon. An analogue clock is ticking away the last seconds before the world crisis, while a noble patina covers fragments for archaeologists of memory. A silent relief in between two wars; a time of diffident bodies, of melancholy leisure, of secret divisions of the world. It is 1929. Peace before an enormous explosion. 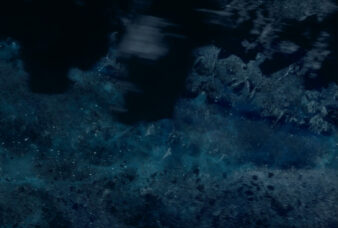 Null Cone
Vladislav Knežević, Croatia, 2022, DCP, 8′
______________
Integrating itself within the micro level of high-speed space dust particles, the nanogenerator is coding models, conjectures and possibilities. The process encompasses firmly elaborated scientific theses, doubts and phantasms, imaginariums and fringe discourses at different scales. The interior architectonics of pataphysical machine is scaled up from the nano level and is rendering emergence with its movements. The spiral rotation with variable speed within the particle simulates, but also potentially actualizes formation. The apex of the null cone represents a process of energy exchange in the form of photon absorption and emission. In the central point the observer is within the moment of now as an interactive part of creation with an emergent uncertain future. The film is not an attempt of scientific visualization, but rather an energy induced construct. 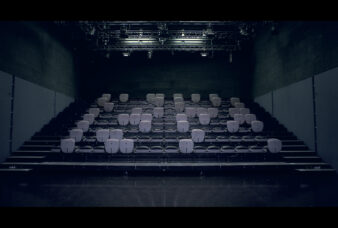 Binary Pitch
Vladislav Knežević, Croatia, 2013, DCP, 7′
______________
In the geometry of a static shot, elements of architecture and space become the subject of a visual experiment. The video consists of three parts: activation (drawing the auditorium out) – coding (central part) – deactivation (drawing the auditorium in). The key notions from Max Bense’s text Aesthetics and Programming (1968) are coded in zeros and ones by way of an animation procedure of lifting and lowering the seats. This cryptic confession of the machine anticipates the virtual reality in which all communication is mediated by the sequences of bits. The auditorium, composed of eight rows with 16 chairs, depicts the field of articulation of a digital code. Architecture of the hall represents institutional surroundings, physical space and a place of establishing a relationship with the perception of space, time and film. 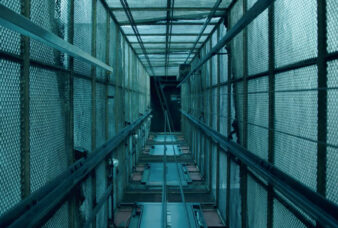 Imploder
Vladislav Knežević, Croatia, 2020, DCP, 6′ 30”
______________
In the parallel process, space and time are defined through the movement of the body and the body is inevitably transformed by the movement in time and space. Accelerated through iterative procedure, dimensions start to merge and the body falls to its astronomical existence. Zero is where time, space and body become one. (Ivor Glavaš)

Vladislav Knežević (Zagreb, 1967) is a media artist and director. He studied film and TV directing at the Academy of Dramatic Art in Zagreb and De Vrije Academie in The Hague. He primarily focuses on audiovisual research and creates using filmed video materials, digital photography, micro-animation, stereoscopic 3D technique and generative electronic sound in an attempt to create a new film media watching experience. His interests revolve around concepts referring to the marginal areas of realistic categories, the experience of new media images, digital aesthetic, utilitarian/fantastic constructs and the consequences of technological-scientific research on human experience. He professionally pursues TV directing, working with multiple cameras, and as a director he made almost 2000 TV shows and documentary projects between 1994 and 2017 (Drugi format, Modul 8, Briljanteen, Animatik, Videodrom, Nove kolekcije, DM talks to DM, Nove tendencije, Crna kutija). Since 1989 he has been making experimental and art films, screened at over 200 festivals and exhibitions in Europe, USA, Australia, Japan, Brazil. Winner of two Oktavijan Awards (Arheo 29, 2010, and A.D.A.M., 2015). Vladislav took part in HT Contemporary Art Award exhibitions at the Museum of Contemporary Art in Zagreb in 2016, 2018 and 2019. A co-founder and curator of the Festival 25 FPS (2005–2009) and in 2017 a founder of collaborative media project Sonvoyce on Source (CD edition Readouts, 2018, Consequent Recordings). In the early 1990s he worked on several music videos shown on TV channels such as MTV Europe, Viva, MCM, with the FX Interzone collective.