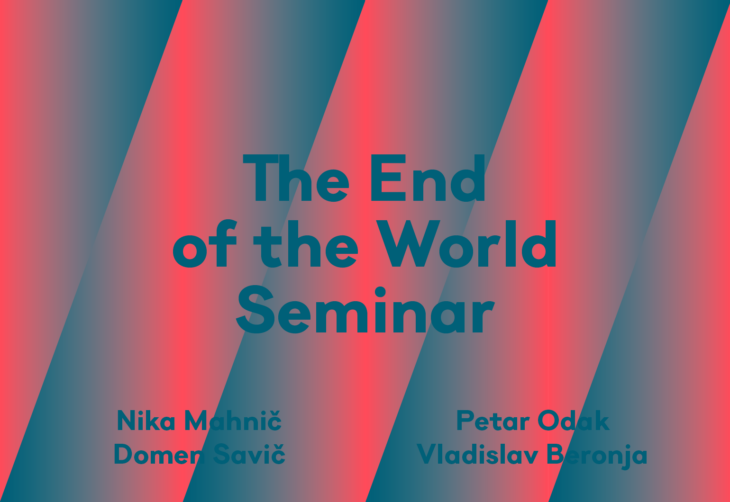 The claims about the “end of history”, which have been around for quite some time, gained a different, bitter momentum during the current crisis. Disturbance and chaos, which entered our lives almost two years ago, caused disorder and disorientation in our experience of space and time. However, the ruptures caused by recent developments are founded in cracks, which have been here long before, and they are echoed within our post-Yugoslav cultural space in specific ways. On one hand, we are constantly surrounded by figments of past fantasies that continue to “haunt” the post-Yugoslav context, while on the other, our everyday is shaped by the global(ized) effects of digital technologies, which dislocate time and space by their own means.

The ways ghosts of the past are intertwining with the present, as well as chilling dynamics of technology which is utilized as means of monitoring and control, present the two thematic focuses of the End of the World Seminar. The experience of time (and space) out-of-joint has been described and utilized within the notion of hauntology, the term which serves as a starting point for the programme. The seminar brings together perspectives of the younger generation of researchers and activists who have been tackling the different paradoxes which are brought to the surface by ruptures in our shared space-time. Their explorations cover a wide range of phenomena “haunting” our here-and-now – from uncanny intersections of past and the present in cultural practices of “dark tourism” and Yugoslav Dark Wave, to the eerie ways digital technologies of the past shaped our present and the challenges that today’s omnipresent techno-solutionism brings to our media sphere.

The programme is divided into two thematic blocks which are devoted to politics of representation of the past and the issues brought by surveillance technologies. The first block is devoted to politics of representations of the socialist past and the complex ways they are present in the here-and-now of today, while the second block is concerned with the uses of technology within surveillance society, also exploring both their past and present.

The seminar will be held in English via Zoom. To attend please apply at: info@scca-ljubljana.si.

7 pm – 8 pm: Nika Mahnič: Sediments in the Machinery for a Future
8 pm – 9 pm: Domen Savič: Eye of the Beholder – Media Discourse of Surveillance

The lecture engages with mundane objects offered to us as a way to affectively experience state socialist pasts in immersive museums: an encounter with history that employs our bodies as multi-sensory complexes but lacks historical contextualization characteristic of more traditional museums. Peter Odak situates these curatorial practices within the so-called new museology (itself a part of affective capitalism), as well as within the recent material turn in humanities. The goal is to account for the affective power these objects exercise over us. The second part of the lecture tries to outline the postsocialist affective complex, showing that these historically decontextualized objects generate a certain affective spectre that haunts the postsocialist time-space, articulating the ambivalence of nostalgia (as a conjunction of hope and trepidation), maybe the only possible way to hold together opposing feelings towards this recent past and, by extension, towards socialism as an idea.

Petar Odak is a Ph.D. Candidate of gender studies at Central European University and Utrecht University, working on the project that explores “The Affective Ambivalences of Socialist Legacies in the Context of the Experience Economy” by focusing on practices of live history reenactments, virtual reality experiences, and immersive museums. In his work, he employs theories and concepts developed within gender studies (affect theory and queer temporalities, embodiment and performance studies, feminist psychoanalysis) in order to engage with broader social phenomena. Currently, he is a visiting fellow at the Institute of Theater Studies at Freie Universität Berlin.

Vladislav Beronja: “Love is Colder Than Death”: The Anti-Utopias of the Yugoslav Dark Wave

Late socialism in Yugoslavia was a period of a profound political, ideological, and economic crisis that began with the death of Josip Broz Tito in 1980 and culminated in the violent collapse of the communist federation in 1991. At the same time, the 1980s were defined by a rise of Yugoslav punk and post-punk youth subcultures that foregrounded alienation from late industrial society by combining rock-and-roll music with the aesthetics of negation and shock tied to the historical and neo-avant-garde movements. Focusing primarily on Yugoslav “Dark” and “Cold Wave” of the mid- and late-1980s, this lecture examines how the post-punk movement enacted a radical critique of “reproductive futurity” (Edelman, Filipović) built into the utopian foundations of the Yugoslav socialist project. Specifically, Vladislav Beronja argues that we should view certain strains of Yugoslav post-punk as an instance of the “queer before gay” paradigm which challenged the heteronormative matrix of the Yugoslav state by insisting on anti-sociality and anti-utopianism, channeling the death drive in service of the queer pleasure principle. The lecture asks whether such an anti-relational aesthetic and ethic can offer anything to the future besides its absolute negation. The presentation will be followed by a brief exercise where participants, using the post-punk archive, will attempt to imagine alternative modes of sociality and futurity in the “void” embraced by the Yugoslav Dark Wave.

Vladislav Beronja is an Assistant Professor of Slavic and Eurasian Studies at the University of Texas in Austin. He holds a Ph.D. in Slavic Languages & Literatures from the University of Michigan in Ann Arbor. His academic interests encompass Yugoslav and post-Yugoslav popular and literary culture, memory and trauma studies, as well as affect and queer theory. He is a co-editor of a volume Post-Yugoslav Constellations: Archive, Memory, and Trauma in Bosnian, Croatian, and Serbian Literature and Culture (2016) and has published various articles, book reviews, and translations.

Nika Mahnič: Sediments in the Machinery for a Future

This lecture inquires into more or less digital technologies of the past, and the ways in which their sediments continue to live in technologies of the present, and in devices for a future. Cases such as the automation in the US census will demonstrate the persistence of legacy technologies and their (un)democratic endowments. Mortality bills of a 17th-century epidemic changed the ordering of political subjects; what can we learn about the present from history, and how does the era of the not-that-novel coronavirus enable us to speculate about the terrifying closures of futures past? How does recording erase, and what kind of violence does it produce? Nika will talk about the ways in which technological decisions limit(ed) future political claims, rights, and justice.

Nika Mahnič is a Ph.D. candidate in Politics at the Queen Mary University of London, funded by the Arts and Humanities Research Council (LAHP). They focus on proprietary analytical tools in the UK public administration and their impact on public policy. At King’s College London, they assist the Civil and Political Rights and Social Justice and Policy Analysis modules. Nika is part of the editorial board of the Journal of Future Robot Life and the scientific committee of Danes je nov dan institute. They also write non-academic texts and dance flamenco.

When trying to address the issues of the surveillance society, a journalist often has to decide which part of the issue (s)he wants to address. Is (s)he more worried about the industry of tech-solutionism, does (s)he want to focus on the role of the end-user or the regulator? The whistleblowing scandals appear to be the tip of the iceberg which hides several of the unaddressed issues, from ineffective regulation, political corruption, overpowering technical solutions and products, and more. Journalists often struggle with the framing of the debate, which furthers the public debate which lacks the aforementioned specific issues attached to the surveillance society. The omnipresent techno-solutionism industry is presenting a framing challenge which in turn hampers the media to cover the issues of surveillance society that goes beyond the consumeristic view of the digital economy. How to frame the debate, which problems to emphasize and which ones to ignore, and how to leave the shock media economy of scandal reporting?

Domen Savič is the director of the NGO Državljan D (Citizen D) which is focusing on developing long-term projects related to digital rights, communication privacy, and digital security, media regulation, and active citizen participation in the political sphere.

The End of the World Seminaris organized by Kurziv – Platform for Media, Culture and Society and SCCA-Ljubljana in cooperation with the Human Rights Film Festival. The seminar is part of the curriculum of the Kulturpunkt’s Journalism School and the World of Art School, but it is also open to the general public.

The programme is supported by: City of Ljubljana – Department for Culture and Kultura Nova Foundation.